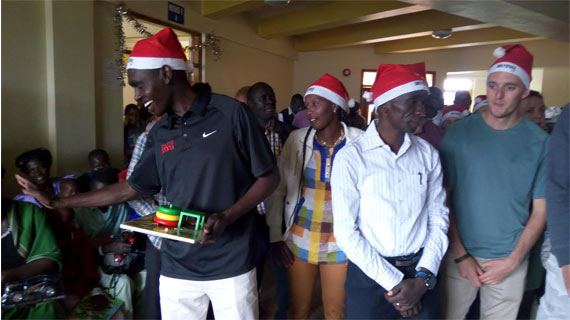 Athletes have called out for a sharing heart this festive season saying that those well-off should also celebrate with the less fortunate in the society.The athletes spoke when they gave out Christmas gifts to sick children in Eldoret.

The athletes that included Olympic marathon champion Eliud Kipchoge, former world 800m champion Janeth Jepkosgei, former world 5000m winner Benjamin Limo and Charlie Grice of Britain finalist at the Rio  Olympics 1500m  teamed up with others in giving out the gifts to the kids at the Shoe4Africa Children’s hospital in Eldoret.

Also present was the CEO Moi Teaching and Referral Hospital Dr.Wilson Aruasa and his counterpart from the Shoe4Africa Foundation.

According to Limo, the kids are the future champions and it was a good gesture to be visited and encouraged especially this season when everybody is celebrating.

“Everybody this festive season is celebrating but we have those who are not feeling well like these kids ad it is good we remember such people.Let us show a kind heart and share whatever little we have,”Limo said.

Kipchoge emphasized for good diet amongst children saying malnutrition was the cause of most of the diseases amongst kids.

The athlete who secured Kenya second Olympic marathon since the inception of the games added that parents should be in the forefront in ensuring that the kids are fit.

“Most of the diseases are as a result of our lifestyles. If we ensure that the kids and everybody is fit, and then we will be able to curb such diseases,”He said.

“Nonetheless we have come to share what we have with the kids.I believe that being together this festive season will make you recover faster,”He added.