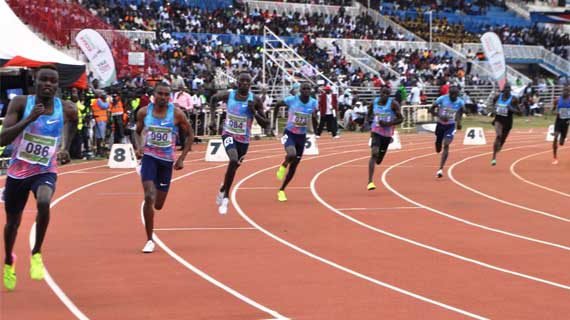 The competitions’ distances were made slightly longer and Athletics Kenya’s vice president Paul Mutwii elucidated that:

“The move aims at putting athletes’ endurance to test. However, we (AK) will revert to standard distances in the subsequent two legs and the national trials for 2021 World Relay Championships set for Silesia, Poland from May 1 to 2.”

The second and third legs will be held on January 23 and February 6 respectively before the national trials on March 3 at Nyayo National Stadium.

This particular sprint race attracted the highest number of entries who braved the morning showers to vie for the honours. Otieno’s splendid performance consigned Zabloan Ekwan who timed 15.8 seconds to the second position and Gilbert Osure to third place after clocking 16.0.

“This is a good start to the series. It was not easy though. I have to keep pumping in the work to improve my time in the upcoming races,” said Kipsang.

Men’s 1000m (800m) was fiercely contested with Noah Kibet beating Cornelius Tuwei by three seconds to claim the decoration. Kibet cruised to victory in 2:20.03, while Tuwei clocked 2:20.06 and Nicholas Kiplagat timed 2:21.04 for the second and third places.