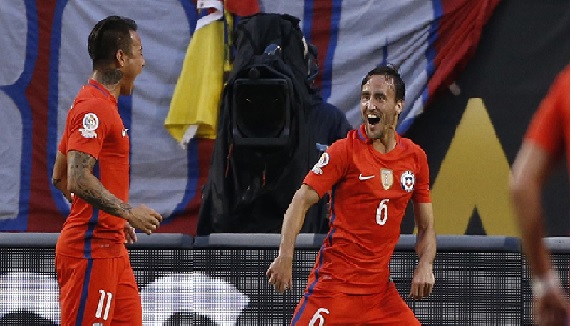 With an exciting Copa America Centenario final at the MetLife Stadium in East Rutherford, New Jersey, less than two days away, with Argentina seeking revenge against Chile while avoiding a third consecutive final defeat, with Chile aiming to defend their trophy, here are the key men who could be the game changers for their sides in the match.

What more can be said of the star genius who is now rated amongst the greatest in the history of football? The talisman of the Argentinean football team will be expected to carry his side to victory with his artistry, assists and, more importantly, goals.

Messi is already on five goals, the second best in the tournament, and five assists, and has gone on to become his country’s all-time record holder with 55 goals during the tournament. Surely, with such a wizard of Barcelona, La Albiceleste will be heavily tipped to win their first trophy in 23 years.

The Paris St. Germain danger man has missed the last three games of the tournament due to injury, but there’s no denying that the forward still remains one of his team’s crucial attacking assets. Di Maria enjoys link up play with Messi and his pace, and skill, will be critical in unlocking the sometimes stubborn Chilean defense.

He may be playing as a defender for Barcelona, but Mascherano is a midfield general for his national side. Though he is not known for flair, his defensive play ranks among the best in the world. Mascherano will be needed to disrupt Chilean attacks, and his passing will initiate the forward play serving the likes of Messi and Di Maria.

It is not often that goalkeepers are mentioned in the list of key players, but when facing the tournament’s top goal scorer in Eduardo Vargas, Arsenal’s Alexis Sanchez and the pile driving foot of Bayern Munich’s midfield enforcer Arturo Vidal, Romero will be expected to be on high alert in making crucial saves for his side.

The Manchester United shot stopper may not have seen much club football during the season, but he still remains the No.1 in national colors, and has only conceded two goals so far in the tournament.

The Hoffenheim striker wasn’t supposed to light up the tournament, but he’s already done so. With six goals to his name so far, Vargas is the top goal scorer in the tournament, and is on a battle with Messi to win the golden boot.

Sanchez has shone in the ongoing tournament, scoring three goals and providing assists as well. The mercurial Arsenal player has speed and energy that enables him to directly attack towards the goal, his guile and technical ability makes him a tough player to mark, and he can strike from afar. The Argentine defense should expect some nightmare.

Vidal is a midfield linchpin, and the Bayern Munich box-to-box midfielder will be expected to scuttle the Argentine attacks, make Messi ineffective and initiate his country’s forward play. The combative player has won the most duels in the tournament and that will be essential if Chile is to make a game out of the final. And yes, he can shoot from distance.

Like his opposite in the Argentinean goal line, Bravo will be on alert to snuff chances by the likes of Messi, Gonzalo Higuain, Di Maria, et al. That said, the Barcelona keeper is not known for lapses in concentration, commands his box with confidence, and is reliable when called upon to make crucial saves.

Though his team conceded five goals in the group stage, the Chilean captain has had a clean sheet in the knockout phase.

Be sure to watch the final ONLY on StarTimes, the official Copa America Centenario broadcaster, on World Football channels 254 DTT and 244 DTH on Monday 27th June at 3am.