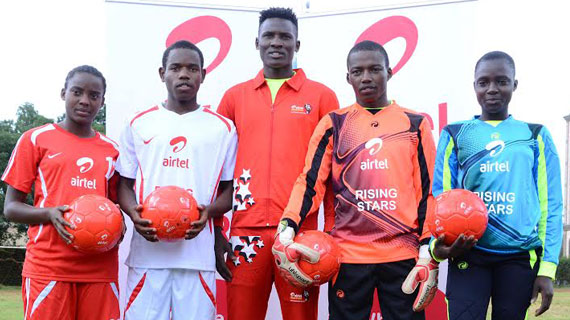 Airtel Kenya and the Kenya Secondary Schools Sports Association (KSSSA), today launched the fifth edition of the Airtel Rising Stars (ARS), an under-17 boys’ and girls’ nationwide football talent search and nurturing initiative in a ceremony held at the Upper Hill School in Nairobi.

The star search will reach fever pitch during this year’s Kenya Secondary Schools Sports Association term 2B National Finals that start on 8th August 2015 in Machakos where Kakamega Boys High School and Butere Girls are the defending champions.

Speaking during the launch, Airtel’s CEO Adil El Youssefi said, “We believe emphatically that nurturing young talent is the means by which we will ensure our youth grow into passionate and responsible citizens. They are important to us and we believe in providing them with tools that will not only empower them, but also give them a platform to contribute positively to the development of our country.”

Mr. El Youssefi further added that “Airtel is proud to be among the major supporters of youth soccer in the country and in Africa. We will collaborate with our partners to ensure that the Airtel Rising Stars continues to cement its place as the most consistent supporter of grassroots football in Kenya. It not only identifies and nurtures talent but most importantly gives an opportunity for young boys and girls to market themselves to several scouts.”

Mr. David Ngugi, the chairman of Kenya Secondary Schools Sports Association (KSSSA) lauded the contribution ARS has made to better the standards of football in the country. “this initiative that Airtel started four years ago,  has given young Kenyans  the opportunity to express their talent through this platform where many of them will be discovered by various clubs in the country and around the world.; I truly believe that by placing emphasis on the youth, we will be able to make significant achievements in the near future, we look forward to continue working with Airtel in ensuring success of this program.”

Started in 2011, Airtel Rising Stars has grown successfully over the last years, this initiative is an annual Africa-wide program that provides a platform for upcoming soccer talent to showcase their skills to leading scouts, coaches and have an opportunity to further their football skills.  In Kenya, the initiative targets boys and girls in secondary schools across the country.