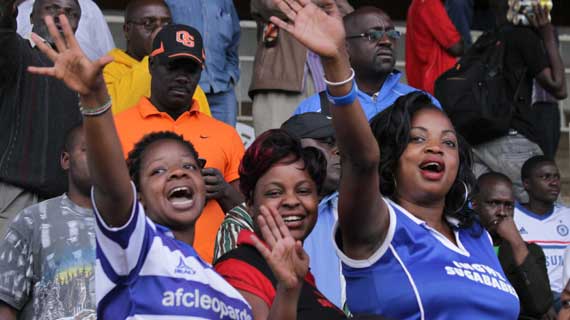 FKF Premier League champions Tusker FC have the advantage towards the defense of their crown with two matches remaining after AFC Leopards did them a favour to beat second placed Kakamega Homeboyz on Sunday.

AFC won 2-0 with former Tusker FC defender Collins Shivachi and Nigerian import Ojo Olaniyi netting in either half to hand Ingwe the victory.

The result from Sunday’s match mean Tusker remains on top of the standings on goal difference as they are both on 57 points with Homeboyz. There are two rounds of matches to play.

The brewers just need maximum points in both games to retain their title while Homeboyz are now left to pray for favours from either Bidco United or Posta Rangers to drain points from the brewers.

Against AFC, Homeboyz will only have themselves to blame after missing scoring opportunities.

They knocked early on the door with Yema Mwamba hitting the side netting after a good run on the left, but their drive was cut short when they conceded first. Defender Collins Shivachi who was handed a rare starting opportunity poked home from close range.

The burly right back is a former Tusker FC player and definitely the goal was a huge lift for both his current and former employers.

Despite conceding, Homeboyz piled the pressure but were unfortunate to miss opportunities from close range. Michael Isabwa shot straight at the keeper with a good angle on his shot while defender Sylvester Owino headed wide from close range.

In the second half, AFC Leopards closed out the game 10 minutes after the restart, Olaniyi shooting home from inside the box after being accorded space.