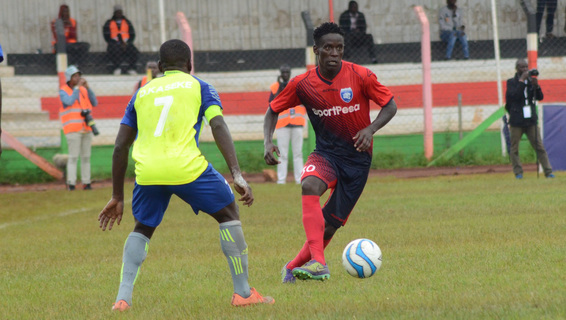 Singida United revenged for last year’s loss against AFC Leopards in the SportPesa Super Cup, beating the 13-time Kenyan champions 4-2 on penalties to book a date in the semi-finals of this year’s showpiece.

Ingwe should have wrapped up the game in 90 minutes but a string of saves from Singida keeper Peter Manyika Jr including one from a 68th-minute penalty forced the game into the lotteries after a barren stalemate in regulation time.

On penalties, Moses Mburu’s attempt was wide while Ugandan winger Baker Lukooya hit the crossbar. Whyvonne Isuza who missed the regular time penalty scored his kick and so did Robinson Kamura.

Singida scored all but one of their spot-kicks, Ally Kenny seeing his attempt saved by AFC keeper Ezekiel Owade.  Former Tusker left back Shafik Batambuze, Adam Miraji, Danny Lyanga and Sumbi Elynyesia all scored for the Tanzanians.

Fans had hoped for a Mashemeji Derby semi-final, but Gor Mahia will now meet Singida as they seek a second consecutive title.

Despite the tough playing conditions due to the slippery nature of the pitch, Singida stuck to their game plan of patent build up and passing the ball around. They created the first real chance of the game after six minutes, Danny Lyanga’s header off a John Tibar cross being saved by Owade.

AFC were not in their element and most of their passes were never complete. However, they came close in the 22nd minute when Dennis Sikhayi’s cross went on target, but keeper Manyika tipped it over for a corner.

Two minutes later, lack of communication saw Isuza and Ray Omondi clash for the same ball off a Brian Marita cross with the two ending up missing it. However the ball landed on Jaffery Owiti behind them, but the winger’s effort was saved by Manyika.

Two mistakes on the other end by Owade almost saw Ingwe fall behind, the keeper failing to hold on to shots. Owade punched Deus Kaseke’s cross into Habib Kyombo’s path but luckily, he could not connect on target.

He did the same from a Tibar shot from distance spilling the ball into Kyombo’s path again, but the forward failed to punish hitting the ball wide.

Manyika fully earned his pay in the second half making save after save. Three minutes after the restart he pulled a double save denying Kamura from a freekick ad Victor Majid’s shot from the resultant corner.

In the 68th minute, he made a huge difference when he saved Whyvonne Isuza’s penalty and he leapt back once again to save Omondi’s effort from the rebound and covered the second bite of the cherry forcing the striker to shoot high in the sky.

With 15 minutes left and Singida’s confidence increased by Manyika’s saves, the Tanzanians sat back waiting to hit on the counter. At the death, though they almost paid for it, but Kamura’s freekick was once again saved by Manyika.