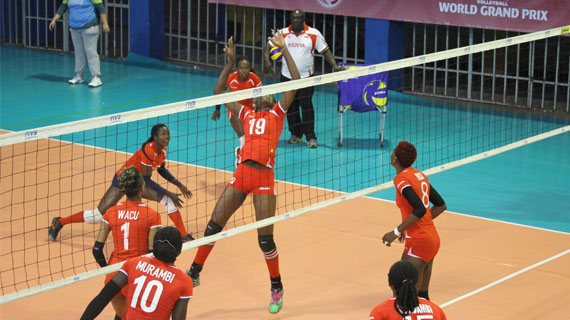 Kenya team training at the Gymnasium in Tucuman

The Northern City of Tucuman in Argentina will this weekend host Round One of the FIVB group Three A Grand Prix action as the country celebrates 200 years since independence in 1816.

There is no better town to host the tournament in Argentina than San Miguel De Tucuman that plays home to the history of Argentinian freedom first celebrated in the old town of Tucuman 200 years ago.

The gym located at the heart of San Miguel De Tucuman City will host the four nations exciting action with home teams Argentina facing Kenya, Dominican Republic and Bulgaria in the first round.

The 36-year-old gymnasium was built in 1980 but has for the past few years not hosted major competitions. The Grand Prix is expected to lift the popularity of volleyball in the soccer dominated nation that has recently received a major financial boost from the national government.

The Argentine Volleyball Federation Feva in partnership with the national government has embarked on a mission to popularize the sport across all the 24 provinces and this includes taking high profile friendly matches and volleyball tournaments to the people.

Argentina hosted Kenya and Bulgaria for women teams’ friendly matches ahead of the Grand Prix while their men’s team played against Brazil in a sold out exciting test match in Palpala – Jujuy within the same week as they prepare for the World League.