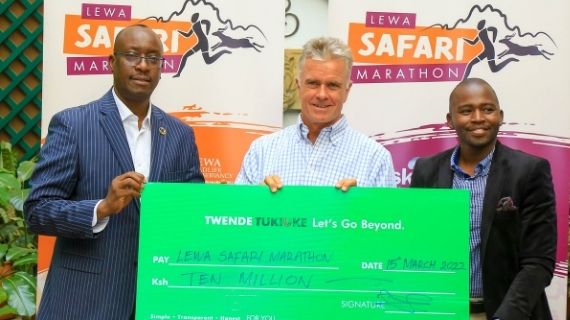 The 2018 edition of the annual Safaricom Lewa Marathon will be held on Saturday 30th June.

Launched on Thursday by all partners Safaricom, Tusk and the Lewa Wildlife Conservancy, the 19th edition of the annual marathon will this year celebrate the success journey highlighting awareness about the projects and communities that have benefitted from funds. Over KES 40 million was raised in 2017 bringing the total amount raised over the 19 years to over KES 675 million..

So far, over 13,000 runners from all over the world have taken part in the unique races since inception and the numbers are projected to increase this season.

The marathon has supported the conservation of some of Kenya’s highly endangered species, notably the Black Rhino, the Leather-back Turtle, Grevy’s Zebra and Mountain Bongo.

“For the last 19 years, the Safaricom marathon has had a huge impact on the lives of communities in Lewa and the protection of the endangered species in the conservancy and across the country. We remain committed to supporting this cause because we have seen the difference it’s making to wildlife conservation and to the communities in and around the projects we support,” said Joseph Ogutu, Director, Strategy - Safaricom.”

“The marathon’s phenomenal impact is far reaching across Kenya and the awareness it raises for our benefices’ projects spans across the globe, an achievement that everyone at Safaricom, Lewa and Tusk Trust is tremendously proud of. We have proven that when we run together we can protect our future.” said Mike Watson, CEO – Lewa Conservancy.

Keeping to the tradition of the title sponsor, Safaricom will donate KES 14.8 million.

As has been the case, the Safaricom Marathon will have three race categories: the 5KM Children’s Fun Run for 10 to 14 year olds and 15-17 year olds, the Half Marathon (21KM) for individuals, teams and corporates, and the Full Marathon (42KM), which is open to individual runners.

For more details on registration, which opens on 1st March 2018, please visit https://www.safaricommarathon.com/