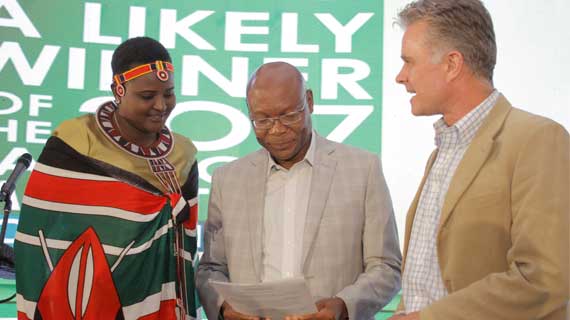 Joseph Ogutu , Director for Strategy and Innovation at Safaricom, Mike Watson the Lewa Conservancy CEO with a beneficiary of the Marathon during the launch in Nairobi on Wednesday.

The 2017 edition of the Safaricom Marathon has been launched. The marathon will officially open registration on Thursday 9:00AM ahead of the world's unique marathon set for 24th of  June 2017.

The annual event, now in its 18th edition, is held to raise funds for wildlife conservation with 1400 runners drawn from all parts of the world  taking part each year .

Over the past 18 editions: organizers - Safaricom , Lewa Conservancy and Tusk Trust- have raised 420 million shillings towards the project that  further supports initiatives around education , healthcare, employment and economic empowerment of communities around the conservancy.

Speaking during the launch in Nairobi on Wednesday , Joseph Ogutu , Director for Strategy and Innovation at Safaricom said that "Each year we continue to see thousands of lives transformed through the Safaricom marathon. We remain committed to supporting this cause because we have seen the difference it is making to wildlife conservation and to the communities in and around the projects we support."

Organizers also announced that it is expected the slots will be filled up  within a few hours after opening as athletes and adventurers  scramble for the few available registration chances each year ," Last year the slots were filed up within a day. This is because  we only have a  limited number  of slots available." Noted Mike Watson the Lewa Conservancy CEO.

The Safaricom Marathon  will have three race categories namely : The 5KMM Children's fun run , the half Marathon (21km) and the Full 42KM Marathon.

This year's theme is - I Run You Win - and seeks to raise awareness around the projects and communities that have benefited from funds raised by the marathon over the past years.

This year , Safaricom who are the race title sponsors will commit 14 Million towards the event.

Registration  can be done here.https://www.safaricommarathon.com/