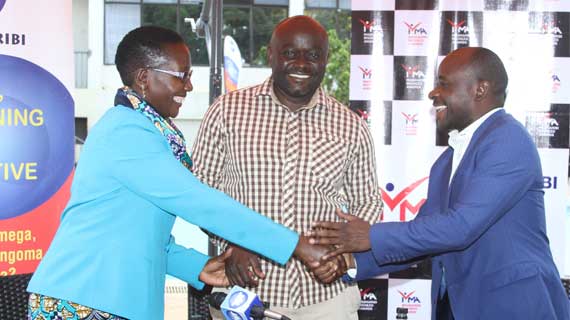 The 2017 edition of the Magharibi Michezo Awards has received a major boost after Bungoma based TV Magharibi announced an agreement to beam the gala dinner Live.

The 2017 edition of the awards ceremony now in its 5th edition will be held on the weekend of 22nd -23rd December 2017 in Bungoma town.

Speaking during the partnership deal in Bungoma, Magharibi Michezo Awards representative Walter Machio announced that this will be the last year Bungoma is hosting the event as the organizing team will thereafter open a bidding process for each County in the western region to host subsequent editions on a rotation basis.

“We are happy to announce this partnership and especially because TV Magharibi shares the same regions we reach out to. This is a great milestone and we are happy to have a valuable partner who will help us reach out to a bigger audience.”

Among those Present during the partnership agreement Included TV Magharibi Managing Director James Wamukoya who announced his excitement to join a noble initiative, “I have followed the awards for some time and I have noted a consistent narrative that seeks to appreciate the efforts of grassroots coaches who work hard to produce future stars. As TV Magharibi we are happy to be part of this great initiative and we will ensure we give it the best.”