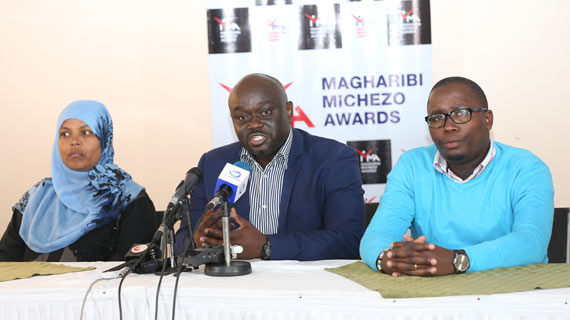 The 2016 edition of the annual Magharibi Michezo Awards was launched on Friday morning in Nairobi with organizers announcing plans to train over 50 community youth coaches in the coming season.

Celebrated as The Premier awards  ceremony in Western Kenya, MMA is  geared towards rewarding the achievements of the region’s athletes as well as encourage the next crop of sporting talent.

First held in 2013 and celebrating its fourth edition this year ,the Magharibi Michezo Awards also seeks to recognize the efforts of those individuals who have in one way or another nurtured sporting talent from the region. This year, the team trained 25 community youth soccer coaches with a mission of  upgrading the technical growth of the game in the region.

This year's edition of the Magharibi Michezo Awards Gala will be held on Saturday December 17th in Bungoma County. This will then be followed by an exciting Skates Festival that promises to thrill fans in Bungoma town.

Last year , as part of the Magharibi Michezo Awards celebration, the MMA Organizing Committee organized and held a successful skating event in Bungoma dubbed the Ignite Bungoma International Skates Festival that attracted skaters from all over Kenya. Leveraging on this fast-growing sport in Kenya, the team will again host the skating festival in Bungoma on 18th December, 2016. This year's event will feature competitors taking part in four categories.

The highlight of the festival will be the 42KM senior and 21KM Junior open races that have attracted the best skaters in the region. It is highly expected that since this will be the first ever competitive full Skates marathon in Kenya ,new national records will be set.

Magharibi Michezo Awards Secretary George Njuguna, speaking at the launch in Nairobi, said, "We aim to provide alternative sports for young people in Kenya and encourage talent development to make Kenya a sporting nation. Other than the Skates Festival, we will hosting a gala dinner on 17th December, 2016 the eve of the Skates Festival to celebrate and recognize sports heroes and heroines from Western Kenya. During this dinner, some of the finest athletes in the region together with community coaches  will be honored and appreciated for their talents and contribution to the sports industry in Kenya."

Njuguna added that "The highlights of the awards will be the The Community Coach of the year Award that will be given to the coaches at the grassroots level who make the champions."

Also present at the function was 2016  Kenyan Premier League Top goal scorer John Mark Makwata, himself a Magharibi Michezo Award winner in 2015. The Ulinzi Stars marksman underscored the importance of  supporting community coaches as they play a crucial role in nurturing future champions , " I am here because I am a living testimony of a community coach who has shown great commitment  and played an integral role in shaping me to where I am today. Magharibi Awards is a blessing to all  those who play the role of  guidance and are sometimes not recognized." he noted.

Skating is an urban sport that is gaining popularity in Kenya. It is an alternative towards building a better and safer nation with creation of opportunities to the young generation with many young people finding skating as a means to express themselves and engage in positive social activities.

Ignite Bungoma International Skate festival seeks not only to promote the sport as a new trending cultural expression in Kenya but as an avenue for positive youth engagement.