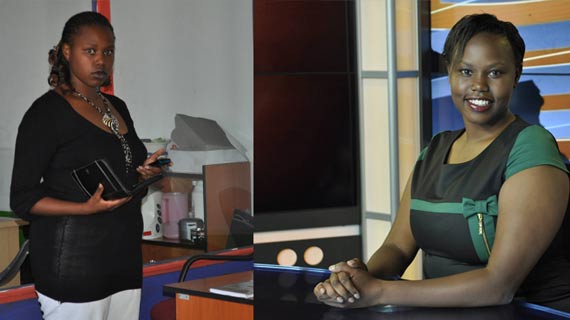 Wanjiku Mwenda before and after K24

Motivation is what passion needs in order to give birth to success. That’s what they say. That’s what we know here at Michezoafrika.com. Today we celebrate Wanjiku Mwenda, a former writer who has epitomized the true spirit of passion, discipline and hard work.

She was simple, she was humble and she was very green when she walked through our office doors over five years ago. Today, Mwenda is one of the leading female sports journalists and news anchors in the country, working with K24 TV. It is not because of favors. No. It is as a result of determination, commitment, hard work, passion and faith in God that earned her the crown.

MichezoAfrika’s producer and editor, Dennis Machio, vividly remembers the first assignment he carried out with Mwenda. “We walked to and from our office, along University way, to Upper Hill Secondary School, to cover the national youth soccer team training under coach Bob Oyugi. We walked because spending too much fare was, at times, luxurious, since we were just starting out. After the assignment, tired and hungry after two slices of bread, Mwenda was to write the report for publication.”

Having come from a radio internship, Mwenda handed in five sentences as an article. Not only that, it was full of grammatical errors and a comical headline. Machio recalls that, after back and forth corrections and sessions with her, she finally came up with a long, well written article, albeit more than 24 hours later. It was her first ever article to be published on MichezoAfrika.com. That was in 2010.

“She was always curious to learn. She showed interest in video editing and sports that were considered unique like golf and cricket,” says Machio.

According to the producer, what stood out strongly was the fact that, despite the lack of heavy financial remuneration, Mwenda remained consistent, committed and disciplined in her quest for greater heights.

"It is true.As wisemen say , water cuts through the hardest rock, not because of its sharpness, but because of consistency in the flow. With time, this budding journalist learned the trade and started walking on her own, scheduling major interviews and making her own name. “She created a brand around herself,” added Machio.

That brand would soon be noticed by K24. The broadcaster approached her since they were interested in hiring a female news reporter. Today, she is a leading figure in Kenya’s sports news industry. And as Ben Sweetland says, the world is full of abundance and opportunity, but far too many people come to the fountain of life with a sieve instead of a tank car, a teaspoon instead of a steam shovel. They expect little and as a result they get little.

To all the young men and women with dreams out there, walk with your heads held high and let the world know what you are capable of. Don't wait to be pushed, don't burry your dreams under the pillow. Take the first step. Be curious. Ask questions. Don't be afraid to venture into new frontiers. Accept positive criticism. Be patient.  Be willing to learn new things. That is what Mwenda did.

At Michezo Afrika, we want to congratulate and celebrate Wanjiku Mwenda. We acknowledge her achievements and would like to wish her better and more fruitful years  ahead. God bless you Wanjiku. May your light continue shining bright.