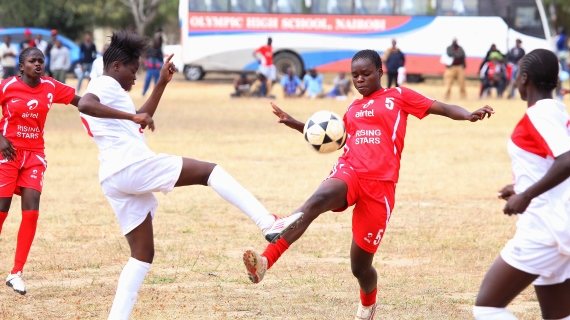 Kisumu Day and Laiser Hill finished top of their respective pools as preliminary round action in the boys football competition at the Airtel Rising Stars National Finals drew to a close in Machakos on Thursday.

Kisumu Day and St. Anthony's met in a top of the table clash in Pool A before a sizeable crowd at the Machakos Academy.

There was tension and excitement among the fans in the run up to the game and this fixture began on a slow note, both sides weighing each other as they looked to settle into the game.

The opening quarter of an hour was cagey, neither making creating clear cut chances but this soon chance when K.D marksman Dennis Ochieng kept his composure to score after 23 minutes, his sweetly struck half volley finishing off a well worked move by the Lake Region representatives who were losing finalists in 2014.

St. Anthony's were stung into action by this goal, taking the game to Kisumu Day. Wilberforce Lugogo was instrumental in dictating play for the Solidarity Boys who simply couldn't get past the composed K.D backline.

It would remain 1-0 at the interval.

Kisumu Day pressed forward after the restart, dominating possession and soon drew a free kick off after livewire Ochieng was fouled outside the box. Skipper Said Tsuma would exploit the dead ball situation, drilling home the resultant free kick to put his side 2-0 up on 52 minutes , a lead that they held to the end.

Speaking after the game, Kisumu Boys Head Coach Daniel Otieno paid tribute to his charges, saying, " We had a game plan, and we stuck to it. The boys were very disciplined and composed and the results showed."

In other Pool A action, Garissa and Kathungi played to an exciting 2-2 draw at the Machakos School.

The Northern Region representatives raced into a 2-0 lead through Farah Bishar's 32nd minute goal and Omar Ahmed's goal on 41 minutes but Salim Hamisi struck on the stroke of half time for Kathungi. Shida Adams would score the equalizing goal on 80 minutes.

Laiser Hill and Passenga reached the semis from Pool B. Laiser Hill,who had already secured semi-final qualification on Wednesday made light work of Waa, crushing the Coastal side 5-1 to confirm pole position while Passenga edged Simotwo 1-0 to reach the last four.

With the semi-final pairings known, Kisumu Day will play Passenga while Laiser Hill are up against St. Anthony's in Friday's action.

Group A runners up who are also Nzoia region powerhouses Lugulu Girls, will play group B winners AIC Kosirai from Mau region.

Lugulu edged St Johns Kaloleni from Coast region 3 sets to 0, as they seek a first final appearance since 2013.

In the boys volleyball, defending champions Malava Boys from Nzoia region will be seeking a second straight final appearance against Cheptil from Mau region while Mivumoni from Cost region will face tournament favourites Hospital Hill from Metropolitan region. Malava finished top of group A after beating  Ngungani by straight sets. Hospital Hill also emerged top of Pool A after edging out  Cheptil by a similar margin in a hotly contested group B encounter.