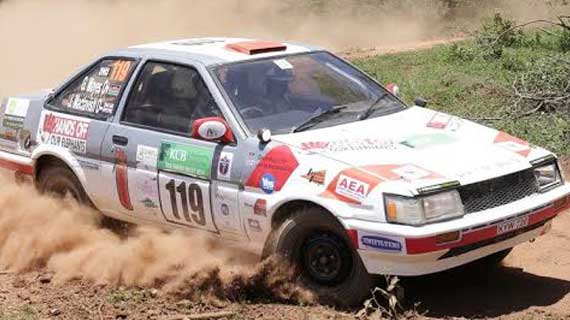 20 year old Zane Young will be making his national rallying debut on the forthcoming KCB Guru Nanak Rally when he joins former co-driver turned driver Geoff Mayes in a “Hands off our Elephants” Toyota Levin.
Zane, the youngest ever podium finisher aboard a quad-bike in rally raids, will be targeting a strong finish in the Naivasha based rally.

Zane, a protégé of Mayes, has been training and practicing all season as he prepares for his full rallying debut and recently took the opportunity to co-drive Gurvir Bhabra in a rally raid event in order to be better prepared for the challenges he will face during the rally.

"I’ve been looking forward to this for a long time now. I really enjoy racing my quad but to sit in a proper car and call notes is something totally different. My sister, Chantal, finished on the podium on her rallying debut and it would be nice to continue the family tradition but the two wheel drive class is VERY competitive so a finish will do!" said Zane.

The Guru Nanak Rally will mark only the second time Mayes has driven in Kenya. He made his debut on the recent KCB Safari Rally and was lying second in class when the propshaft failed, forcing his retirement. Since then the Chloride Exide, H2Pro Hydrate, USN and Formula SR supported car has undergone an extensive rebuild.

"To say I’m excited is an understatement. I saw a little bit of the potential of the car during the Safari and my team have done an incredible amount of work to get it ready for the Guru Nanak. Although I’m interested in comparing times, a finish is far more important than chasing the leaders, we’ll leave that for next year….," explained Geoff.

The team will once again be promoting the “Hands off our Elephants” campaign. This highly successful campaign was created by wildlife direct and has the full support of the first lady of Kenya, Margaret Kenyatta.

The campaign has successfully been raising awareness of the poaching problem that is currently decimating elephants and rhinos at an alarming rate and the pressure is on the government to step up its fight against these illegal activities.

The Guru Nanak Rally is the final round of the 2014 KCB Kenya National Rally Championship and takes place around Naivasha. A total of eight stages make up the 347 kilometre route. The ceremonial start and podium finish will take place at the new Buffalo Mall in Naivasha on Sunday 23 November.