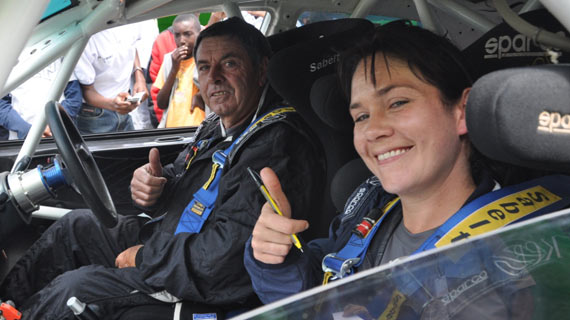 With the 2012 Kenya National Rally Championship already decided, top drivers have nothing to lose and are looking to have a bit of fun at the 33rd KCB Guru Nanak Rally headed for Suswa and Kedong on the weekend of November 17-18.

Newly crowned Championship winner Carl "Flash" Tundo has announced that he is swapping navigators with his father Frank and will be teaming up with his sister Tash Di Cangio.

Frank, a veteran of the Safari and currently in Division Two, will be with his son's co-driver Tim Jessop, incidentally the 2012 KNRC Navigators' Champion.

This will be the first time that Jessop, a four-time KNRC Champion, will be co-driving a different driver other than "Flash" -whom he has guided to four Safari Rally outright victories since 2004 in South Coast.

"Yes Dad and I are swapping navigators in the Guru Nanak Rally. It will be interesting to see if it makes any difference," joked Flash, adding: "I am not sure navigators do much anyway!!"

Meanwhile, Tundo's teammate Alastair Cavenagh, who is recovering from broken ribs sustained after the Eldoret rally is unsure as to whether he will participate in the event.

"'Unless my ribs are a lot better than they are today, there is no way that I will be driving in the Guru Nanak," quipped the season's pace- setter Cavenagh.

Ian Duncan, on the other hand, will be gunning for a record and fairy tale 12th career victory in the prestigious Guru Nanak Rally, first staged in 1973 and won by Vic Preston Snr. and Bill Parkinson in a Mercedes Benz 250.

Duncan won the Guru Nanak four times in a row with Ian Munro between 1986 to 1989.He won it again in 1995 with Dave Williamson in a Toyota Celica Turbo. Duncan was at it again with another four successive wins between 2000 and 2003 navigated by Coast- based Salim Haji in a Toyota Land Cruiser pick Up before claiming two other feats with Amaar Slatch in a Toyota Hilux pickup in 2006 and 2007.

Baldev Singh Chager, the 2004 Guru Nanak winner and 2008 KNRC Champion hopes to secure his first win of the season in his state-of-the-art Subaru  N16  car.

"The Subaru N16 has proven to be very fast on smooth flowing stages but seems to lack the edge on jumps and extremely rough conditions. Not many events favored the this make of contraption this year as it was rough and full of big jumps!," observed Chager.  South Africa-based Lee Rose is the 2011 winner of the Guru Nanak Rally.

KNRC STANDINGS AS AT ELDORET RALLY