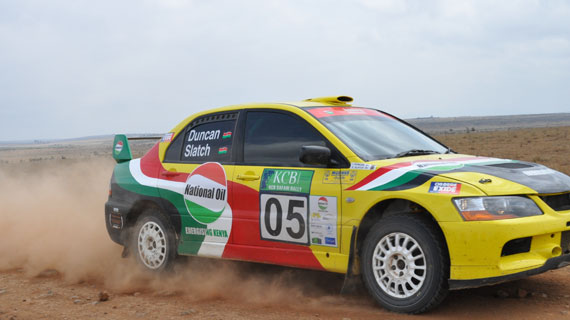 The waiting is finally over and drivers will be on the warpath in the second round of the KCB Kenya National Rally Championship slated for Nyeri on the weekend of April 6-7.

Parts of the anticipated high adrenaline action will be held at picturesque terrains of Mount Kenya Forest,  Mathira and Mweiga areas, adding to all the if’s and but’s that accompany such races.

Organized by Rallye Sports Club (RSC), resources and expertise have once more been combined in the past few weeks to host a rally that will prove to be as thrilling to spectators as it is challenging for the competitors.

Last year in Nyeri, spectators filled the prestigious Ruring’u Stadium to the rafters and the upcoming KCB Mobi Bank Nyeri Rally is not expected to be an exception at the Kabiru-ini ASK Showground where spectators will be treated to some exhilarating displays of rallying artistry.

The fans are yearning for another round of action after the KCB Voi leg programmed for last month was cancelled due to the recently concluded national General Elections.

With the fray coming exactly a month after the first leg held in Kajiado, pundits have already predicted that it will offer real test of nerves for driver-navigator partnership.

Crowd-favorite and 2008 National Champion Baldev Singh Chager who leads the 2013 KNRC with 80 points must be itching to prove just what stuff he is made of though he must contend with swift challenge from legendary drivers Ian Duncan and Azar Anwar who occupy the second and third positions with 60 and 50 points respectively. Having already driven the Subaru Impreza make for a duration spanning over a decade, Chager is expected to unveil his new Mitsubishi Lancer Evolution 9 contraption which was acquired from the United Kingdom.

There is more enthusiasm ahead of the race given that double (1999 and 2010) champion Alastair Cavenagh -who gave the Kajiado leg a wide berth- will be making a comeback, so is defending KNRC Champion Carl "Flash" Tundo who will be out to reclaim the title after retiring in the first leg due to mechanical gremlins.

The KCB Classic Car Cup which has invariably proved popular with spectators due to its attachment with the vintage Safari cars should also be a crowd puller with leader and current champion Aslam Khan, Hardev S. Sira from Britain and Ramesh Visram the frontrunners in that order.

In the KNRC Division 3 runaway leader Tejvri Rai will be waiting to pounce once the action gets underway but has to be wary of Alasdair Keith and Jazzy Chana both of who are breathing on his neck in the number of points registered so far.

The S-SPV Class is expected to be an affair between leader Alex Horsey from Mombasa, Keith and defending champion Jazzy Chana while in the 2WD class are Adnan Suhail, Dennis Mwenda and Gurmit Thetthy.

Described as one of the greatest rally adventures in the KNRC, scrutineering will be done on April 6 followed by the ceremonial flagging off outside the KCB Branch the same day from 1pm.

According to the Additional Supplementary Regulations (ASRs), reconnaissance amongst crews will be done on April 5 from 6.00 am to 6.00 pm while those who will not have gone through the exercise will be allowed to do so on April 6 from 6.00 pm to 10.30 a.m.

The Nyeri tour will feature 10 competitive stages totaling 188 kilometers with the spectator stage set at Kabiru-ini ASK Showground that is also the venue for the prize-giving ceremony on April 7.

Meanwhile, RSC will organize a training rally at the Athi River Portland Cement Factory on March 30.
The event will serve as part of celebrations to commemorate Easter as well build-up for drivers ahead of the KNRC second leg in Nyeri. It will be a unique event as the all rally officials will be exclusively female.