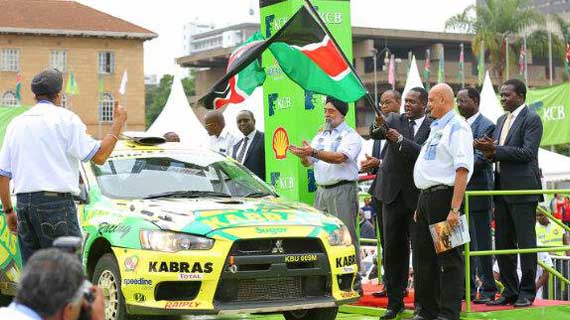 Sports Cabinet Secretary Hassan Wario on Friday morning flagged off the 63rd edition of the Safari Rally at the KICC in Nairobi ushering in a spectacular weekend of speed and fun as drivers tackle over 1000 kilometers.

After KICC ,Drivers will tackle a 69.50 Kilometres of liaison distance through to Konza Service where they will have a privilege of 10 minutes given to service their vehicles.

They will then head back to the refuel zone at Konza before tackling their first stage of 39.55 Kilometres stage at Lisa Ranch. They will return to Konza refuel stage for the third time after which they will tackle a 5.90 Kilometres stage at Machakos People’s Park then head to refuel zone before repeating the Lisa Ranch section with a 45minute service after the Lisa Ranch stage will be given to drivers before heading back to Nairobi where they will assemble at KICC for overnight perce ferme.

Day two on April 4 which will be a Saturday will see the combatants restart at 5.30 pm and then head for refuel first at Shell Petrol Station on Thika Road and Shell Petrol Station in Karatina. The next destination is a road side service just before the Legetia start and they will do five stages including Lengetia, Loldaiga, Ngare Ndare, Nkunga and ASK Meru Spectator Stage, covering the day's total of 420.92 kilometres of which 125.92 kilometres will be competitive.

Day three which will be the last will literally be a test of nerves and skills for drivers as they will cover 10 stages, which is not for the faint-hearted. At ASK showground, they will make two repeats then make a second run of Loldaiga, once each in Kisima and Kibirichia stage make a second run of Nkunga before proceeding to Meru Forest.