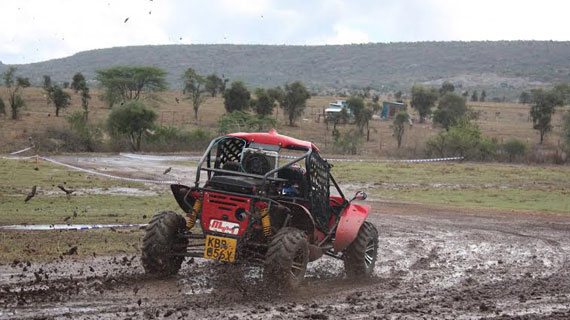 With the introduction of 'Bambino Class' in the 2014 Kenya National Autocross Championship, youngsters aged between 11 and 16 years can now enter in a "Magi-Bug".

Rightly so, round one of the Autocross series which heads to Jamhuri Park racetrack this Sunday has thus far attracted three entries in the new bambino category namely Ryan Bailey, Raiyan Ganatra  and Jadini Nzomo. This will be Ryan's first championship race in the buggy as he is doing all the nine races in the season. Ryan has twice ran the Magi Bug last year and despite not being classified, he was able to beat some "Attacker" buggies and rally cars too.

In another development, Nisha Pandya will be driving the 2WD Turbo championship winning buggy lent to her by her brother and 2013 champion Amit Pandya.The event will be organized by Kenya Motor Sports Club (KMSC).

Kabras Racing Sugar will be represented by Onkar Rai in the Open Class whilst champion Anish Chouhan starts his title defense in the 4WD Turbo class.

As usual, this year's  Autocross series shall feature 9 races with prospective champions required to fulfill the 75% threshold for attendance as per the National Competition Rules (NCRs). What this means is that anyone eligible to win a championship must do 7 out of 9 races.

Meanwhile, proper safety measures will be put into place to encourage competitors to ‘soar through the air’ and land safely, said the Autocross Commission Chairman Gurvir Bhabra.

A team consisting of senior officials from Kenya Motor Sports Club  has been working round the clock to ensure that they put up a great show come Sunday's meeting.

Action should be fast and furious with a bumper entry that includes all the current crop of top autocross drivers.

Additionally, a sizable number of participants, including Sahir Mughal and Nikhil Kapoor in the Quad/ATV Class and a host of new and established buggy competitors and rally machines have confirmed entry.

Gurmeet Singh Mehta has confirmed his participation in the 2WD Non-Turbo class.The event, supported by Security7 Identisys is KMSC's first event of the season.

“We have been working round the clock to keep the Mugi-Bug in good nick and we believe we are very well prepared for the race. We now have reliable tyres for this event and I have also been psyching-up mentally looking forward to the race," said 11 year old Ryan.

The Magi Bug has really shown what its  capable of doing and this was evident during last November's EMC Autocross in Athi River.