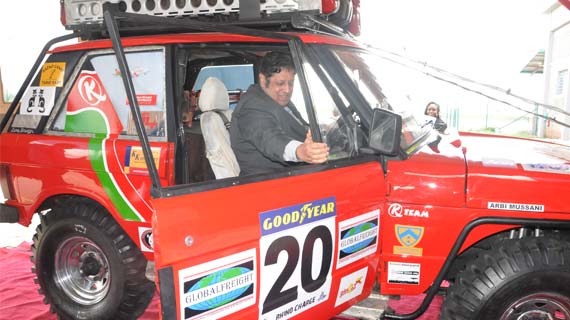 The 2013 Rhino Charge annual off road motorsport event will be held between May 31st to 2nd June. This year’s event on Wednesday received a cash boost when Kenya Airways Cargo announced a Two Million shillings sponsorship towards the event.

The Rhino Charge is an annual motorsport competition that seeks to raise funds for conservation of Kenya’s Aberdare Ecosystem. Organized by The Rhino Ark Charitable Trust, the Rhino Charge has been held in Kenya since 1989 and has been growing in stature each year.

The sponsorship from Kenya Airways has received a half a million boost from last year’s 1.5 Million shillings.

Out of the 2 Million shillings, KShs1, 250,000 will be channeled towards sponsoring one of the teams taking part in the event – the Global Freight Team -- with the remaining KSh750, 000   going directly towards   supporting the activities of the Rhino Ark Charitable Trust.

Kenya Airways’ Chief Operating Officer, Mbuvi Ngunze, said that through sponsoring sporting activities that are tied to noble causes such as the Rhino Charge, the airline was contributing to the sustainable development of Kenya and the continent of Africa.

“This sponsorship underlines our commitment to global best practices, which emphasize environmentally sound business operations, through support for environmental protection and conservation. This is imperative for sustainable business development because a thriving ecosystem enables businesses to thrive,” Mr. Ngunze noted.