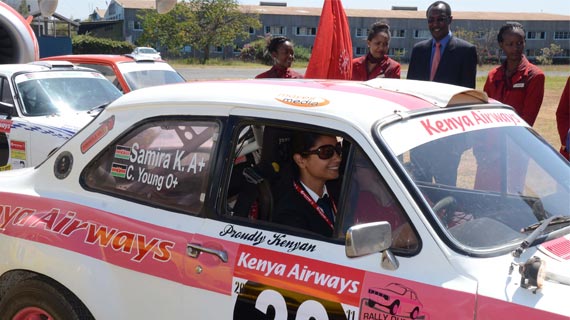 Samira Khan and Chantal Young on Thursday landed a major boost when their 2013 rally calendar was boosted by Kenya Airways who announced their support to the duo.

The young, daring, pretty ladies in their Ford Escort Mark 2 will hit the roads to challenge for classic cup honors in the KNRC series as well as tackling the daunting world famous East Africa Safari classic Rally in November.

For 2013 Kenya Airways will be the title sponsors for the Rally Queens and the Kenyan top airline company is no stranger to rallying partnership after they previously headed Samira’s ambitious campaign to contest the East Africa Safari classic in 2011. On that event, Samira brought her Ford Escort home inside the top 30 overall at the end of the nine day marathon.

Samira was understandably overjoyed about the sponsors’ announcement on Thursday and said,

“It was an honor  to have our national airline support us in 2011 and for them to agree to support us for the entire 2013 program is fantastic news  for the team. We are both determined to succeed this season and we will push harder.” Said the KQ pilot.

Also joining the Queens for the 2013 season is Liquid Gold Formula SR a revolutionary new mechanical lubricant manufacturer in Kenya. They too will be sponsoring them.

Young on her part said she is pleased to be part of one of the biggest classic rally in Africa. She was full of praise for the sponsors promising a great season.

“We are going for the Safari classic expecting a clean run and finish. Just like last year in the KNRC we want to achieve a100% finish in all rallies. To our sponsors thank for coming on board and having faith in us. We are determined to make all those behind us proud.” Said the 21 year old who is an assistant hotel manager in Nairobi.