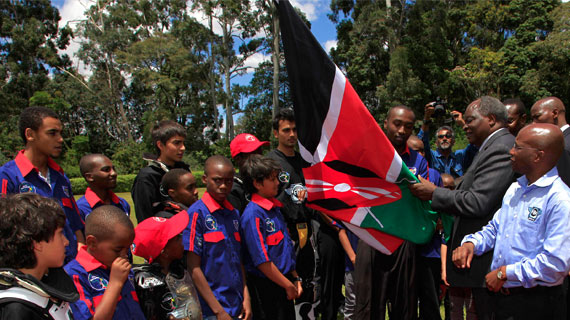 President Mwai Kibaki has directed the Sports Ministry to move fast and establish reasons which contributed towards Kenya’s dismal performance at the recent Olympic Games in London.Kenya scooped a paltry two gold medals in London which were certainly a far cry from past glory years when the country conquered middle and long distance races.

The President was speaking during the Flag Presentation Ceremony to the Kenya team for the FIM Africa 2012 Continental Motocross Championship which takes place in Kampala this Sunday.

During the function, the President also said he is keenly awaiting for the Kenya team report on what actually transpired.

“We are proud of the Kenya team performance as a leading sporting nation. Let’s not take that for granted,” said Kibaki.

At the same time, the President reminded all sporting federations that they held leadership positions in trust, and should put the needs and aspirations of all sporting fraternity above any other consideration.

On the same breath, the President called upon all Sporting Federations in Kenya to exercise transparency and accountability in all their endeavors and ensure professionalism is sustained in all sporting activities.

“I would like to remind all sporting Federations, who are entrusted with the mandate of guiding sports in the country to be transparent and accountable at all times so that they must not bring sports into disrepute. I would like them to put the needs of all sports personalities above all else,” said President Kibaki.

The national Olympic Committee of Kenya (NOCK) and the Athletics Kenya has come under severe criticism over Kenya’s dismal show in London. Only David Rudisha (800meters) and Ezekiel Kemboi (300meters steeplechase) got gold in London.

On the motocross front, the president said the FIM Championship comes with lots of excitement and expectations and it is his expectation that Kenyans will do the county proud. “We need to promote the East African cultural heritage at this memorable event.

“The most recent event was in the 2007 Championships in Nairobi when the country’s team emerged victorious. I therefore call on the East African Motor Sports Club, who are the custodians of the motor cross sport in the country, to keep up their hard working spirit,” Said the President.

He called upon the team to maintain high standards of discipline and hard work so as to excel in the sport, in school and in all other spheres of life.
Sports Permanent Secretary James Waweru confirmed a token of KSh. 500,000 to the Kenya motocross team.

Sports Minister Dr. Paul Otuoma on his part said his ministry will recruit sports officers countrywide in order to develop the youth and talent at the grassroots.

Dr. Otuoma said the hard work and commitment exhibited by the Kenya National Motocross team was a clear testimony of their determination to win in the Uganda championships.