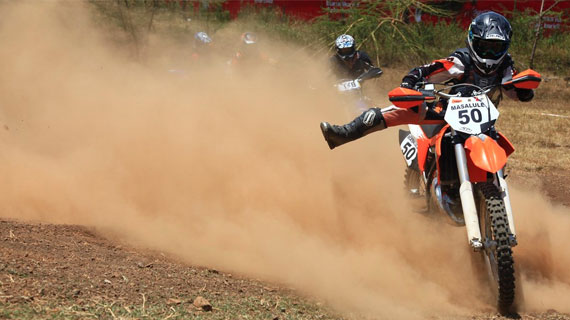 It was a dream come true for Ngugi Waweru as the soft-spoken rider racked up his maiden career win at Solai racetrack in Nakuru on Sunday.

Ngugi savoured a maximum points victory after the official three heat runs concluded but candidly admitted that he enjoyed every bit of the scintillating showdown. Ngugi was during prize giving voted the best rider of the fourth meeting that was organized by Rift Valley Motor and Sports Club (RVM&SC).

MX85 was indeed the most competitive category- and worthy of note were the wheel-to-wheel displays which treated rift valley onlookers to some exhilarating displays of motocross artistry.

"There was lots competition from Githuku (Mungai) and the likes. The first race was wet and I didn't get a good start. So I managed to minimise mistakes and led the proceeding races from start to finish," said a jubilant Ngugi.

MX1 was also turned out to be a real wheel-to-wheel fight with it's lead changing on sundry occasions.

For Guya, second overall behind Apollo in MX2 (without prior practice) wasn't that bad.

"Due to exams, I have not been practising but I hope to get back to top form in due course. I tried my best but it was really hard for me," admitted Guya.

A fight between Apollo and Shivam in the latter stages was breathtaking.

"Shivam is a great rider but I realised I just lacked the much-needed stamina in the race. But I'm almost coming to grip with my new (Honda) bike," said Apollo.

Tutu who beat Shivam in the second meeting at Jamhuri a few months back wasn't a pushover either. He  fought back in the second and third races but settled for second in MX1.

Shivam got back to winning ways and was in imperious form as he left his rivals Tutu and Isaac Kuria to fight for the runners up slots.

Dekker Kihara was also in top form as he won the MX50 class for the determined diminutives. An unexpected downpour on Saturday night had changed the somewhat dry conditions riders had been practising on for the fourth round.

And it turned out to be a real challenge during the first heat- across all classes.

The overnight downpour rendered the track slippery especially around corners and jumps. By heat two, the track had dried up; making riders a lot more confident and aggressive. And after the initial round three was cancelled in April due to heavy rains in Nairobi County, riders were all itching to ride.

Ethan was in fine form too on his way to chalking up a flawless 60 points victory in his MX65 category. He was followed by Callum Hayes and Maina Wanjigi.

Mbuki won in the latest instalment of his rivalry with Ivan Guya in MX2. Samir Sherman was third behind the two.

The next round of the national motocross series will take place on June 23 at Jamhuri.  This will be the premiere round of the FIM Central Africa Championship (CAC)  featuring Ugandans. Tanzanians and hosts Kenya.

The Sunday's event which coincides with the World Environment Day will be a team building event for the Kenya team ahead of August's FIM Africa Continental Championship in South Africa and the CAC round 1 in Nairobi.