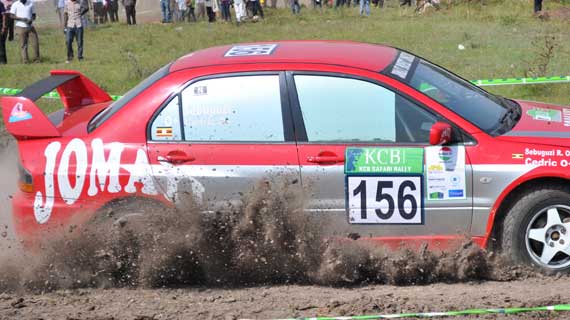 The 7th series of the Kenya National Rally championship goes down on Saturday, October 6th 2012 in Eldoret with organizers fearing the event might be affected by rains which are currently experienced in the region.

The number of ladies who will be taking part has significantly gone up with over eight ladies set to grace what is regarded as the oldest Rally in the Kenya rally calendar.The ladies will be led  by the ever present Warembo Bila make up team of Stella Macharia and Navigator Hellen Shiri.

Speaking during the Rally in Nairobi, Kenya Motorsport Federation General Manager Mwaura Njoroge  said all the necessary  preparations have been made to ensure the rally ends despite the rains which are likely to pour on cruise day.

“We are looking at over 275km to be covered. Drivers will be fighting to enhance their tally in various divisions. Rallying in the all weather roads will be something to definitely look forward to and a lot will be at stake come the weekend.’ Said Mwaura.

Carl Flash Tundo who has won three rallies this year, will be out to prove his superiority in his Monster Mistubishi Evo 9.Alastair Cavenagh who won the 2010 edition will be trying to redeem himself by winning Eldoret. Ian Duncan in his Mistubishi Evo 9 and Baldev Chager in his Subaru Imprezza are also among the people to look out for.

In the two wheel category Nadeem Kana who is leading with 355 points is in perfect position to win his first championships.

His Navigator James Mwangi said they will be facing the marathon without any fear, saying they are only going for a clean rally.

“We are leading with 115 points from the second placed team. All we need is to enjoy the race and make sure we finish in good condition. Having won three races this year in Nakuru, Mombasa and in Kisumu leaves us as clear favorites.”  Said Mwangi.

Two time 2WD champion Leonardo Verse who has not had a perfect year said he will be working to delay the champions to be by making it to the podium finish.

“Right now there is nothing we can do since I have not had a consistence year .I won the Nyeri  rally early this  rally then had problems on the way. I will delay the party though.” He said.

The rally will begin at Kandie Farm and end at Kaptili in Eldoret. There will be a spectator stage at Kaptagat Forest  where drivers and navigators  are expected to  thrill fans with stunning displays  on Friday .