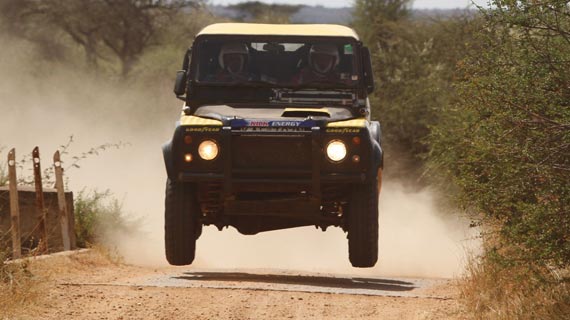 The 2012 National Cross Country Rally Raid season came to a dramatic conclusion with new drivers savoring their maiden feats during the Rift Valley Motor & Sports Club (RVM&SC) round staged at a serene location around Kedong Ranch in the past weekend.

It was a dream come true for Sean Wilcock who was crowned the new motorcycle champion taking over the coveted diadem from seasoned driver Shivam Vinayak after years of trying.

Nish Lakhani and Teeku Patel in their "Kenya Cat" contraption retained the car class title for the third year running and so was "battle-hardened"  Shazar Anwar who won his fifth crown in the competitive Quad Bike class.

"It was a very good season with varied routes and well organized rallies. I'm very chuffed to have won the championship for the third time! Many thanks to my navigator, my sponsor Suntrek Safaris and Simon Sharpe Services," said Nish.

New teenage Champion Tejas Hirani was finally ascertained in the buggies class despite finishing third overall in his class. The quads title was last year won by Ian Duncan who has since  participated in the car, bike and buggy classes this season.

Tejas' navigator and A.S.R.A. protege Riyaz Ismail was also crowned the champion in the Class.
Riyaz made his Rally Raid debut this year in Masinga navigating Tejas. The duo won the Masinga meeting, the Shimba Hills MMC tour and finished third in the Kedong Raid to clinch the 2012 Championship in bravado!

On Sunday,  Ian Duncan won the buggy class followed by Mikey Hughes as Tejas completed the podium dash on his twin seater "Magi-Bug".  Other entrants in the buggy class were Chris Outrum and Coast-based Alex Gibbs who drove his "Gremlin Buggy".

"It was a wet raid on the first day. Heavy rains pounded parts of the section. It was also tough for me as a navigator as the notes got wet at some point and kept on tearing. But we managed to finish. RVM&SC and Geoff (Mayes)  put up an awesome route," Riyaz said of the magnificent season's run on their two-seater Magi-Bug, which is a new road legal buggy which made way into the Kenyan market this year.

Shazar was all smiles: "It has been a challenging Championship this year. Competition has been tough with many quad riders being on top of the game. I'm glad to have managed to win this year again for the fifth year running and thanks to my sponsors JCB Ganatra and the support of my wife and family."

Over 40 participants endured two days of racing and about 200 kilometres of varied terrain which treated spectators to some exhilarating displays of off-road racing artistry.

Shaun Miller was indeed the star attraction in the bikes class after victory. But he had to contend with playing second fiddle to Wilcock, whose  third overall finish in Kedong was enough to enable him claim the 2012 Championship.
Adin Haq in his  Kenyan built “Bowler” won the car class with Eddie Belcher wrapping up his run in second position driving a Tomcat.

The 2013 Raiid has traversed several picturesque locations across the country including the Masinga Dam, Kedong, Ol Doiny Lemboro near Nanyuki and for the first time ever in Kwale County.