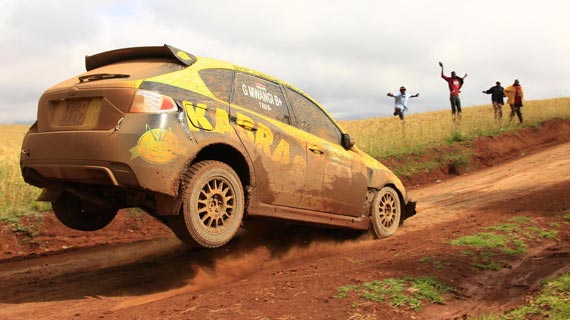 53 drivers have confirmed participation in the fourth round of KCB Mobi Bank Nakuru Rally which heads to the dry and dusty Rift Valley environs this coming weekend.

Fans will be expecting thrills as the who is who in the rallying fraternity is expected to compete after the Kijiado, Nyeri and Voi Kenya National Rally championships (KNRC).

Anwar’s navigator Pastor Julius Ngigi took the opportunity to speak on the upcoming rally and why drivers and spectators have to keep safety.“Drivers are mirrors to society who have an obligation to live by example. Let us all take leading role in educating our fans to adhere to safety procedures while avoiding drunk driving.” He said.

The event is co-sponsored by iway-Africa, ICEA Lion Group and ALS. On Tuesday in press briefing held at the Wilson Airport, ALS were introduced as the official safety and evacuation sponsor to the KNRC series.Chager is leading the KNRC 2013 series with 190 points ahead of Duncan and Tundo who both have garnered 140 points so far.

With six national titles and multiple victories Duncan has established himself as the most successful driver amongst the current frontrunners.

Duncan finished second in the season opening rally had his title ambitions frustrated when he  crashed against an oncoming ambulance  in one of the sections during the Nyeri Rally. He recovered from the mishap by winning the Voi Rally three weeks ago.

“It is good and exiting as any one of us could win on the day and we are good friends outs side the rally car”. said Tundo.

Scrutinizing and documentation will be on Friday at Lesiolo Grain Handlers Silos, Lanet. The spectator stage gas been  set at  Kipsyenan Primary school. The rally will start at 07:00 hours at KCB Menengai Crater Branch in industrial Area.

The ceremonial finish will be from 17:00 hours at Kambi ya Moto spectator.