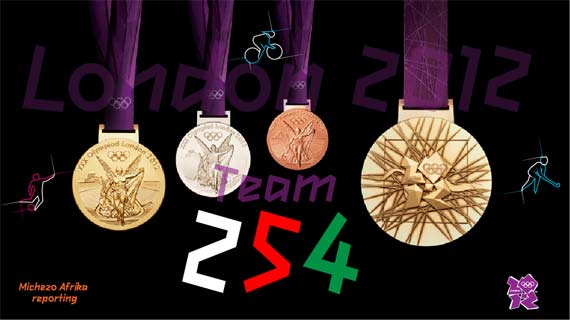 Uganda’s Stephen Kiprotich produced a shocking performance in the final ten Kilometers to relegate Kenya’s duo of Abel Kirui and Wilson Kipsang to silver and bronze in the men’s marathon winning Uganda the first Olympic gold in London. The Olympics gold was last won by Kenyan the late Samuel Wanjiru in Beijing.

Ethiopia’s trio of Sefir Dino, Abshero Ayele and Feleke Getu who were among the leaders in the first quarter all dropped out and did not finish the race. Tanzania’s Musa Faustine was 33rd (2:17:39) and Ramadhan Samson 66th (2:24:53).

2012 London marathon winner Wilson Kipsang pulled away after half an hour to lead the field for over an hour commanding a 100m gap between himself and the second group. His commanding pace was slightly cut out on the 22KM mark when he was forced to back track a few steps to get himself some water. The second group led by world champion Abel Kirui and winner Stephen Kiprotich took advantage of his reduced pace after the half way mark to catch up and reduce the race to an East Africa affair in contention for the top three medals.

After 35KM, it looked comfortable for the Kenyans with Kirui and Kipsang breaking away from the Ugandan. Kiprotich who was running with his last cards held firmly to his chest pulled a fast one on the Kenyans sneaking his way to the lead and accelerating all the way to the finishing line.