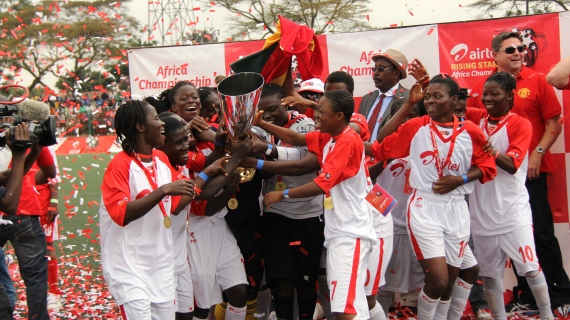 Officials from Manchester United will jet in the country next week to witness the finals of the 2013 Airtel Rising Stars’ secondary schools’ finals that will be held in Embu from 6th to 10th August. A total of 16 teams qualified in both men and women category.

Manchester United who partnered with Airtel to nurture talent from grass root to national stage will see a delegation led by Jonathan Rigby tour the country to review the progress made in the youth football of Airtel Rising Stars since its initiation two years ago.

Airtel communication Director Dick Omondi says a technical team led by FKF Technical Director Jacob Ghost Mulee will also pitch camp at the finals to identify four potential talents that will progress to join other stars in a clinic academy in DRC.

“We have already identified a technical team comprising of four coaches led by Jacob Ghost Mulee that will help identify the potential talents that will join other stars in August under the tutelage of the Manchester United Soccer Schools coaching camp.” Omondi says.

The stars’ search which kicks off next week at the Kenya Secondary Schools Sports Association term 2B games finals will culminate in the Africa championships that will be held in Lagos, Nigeria.