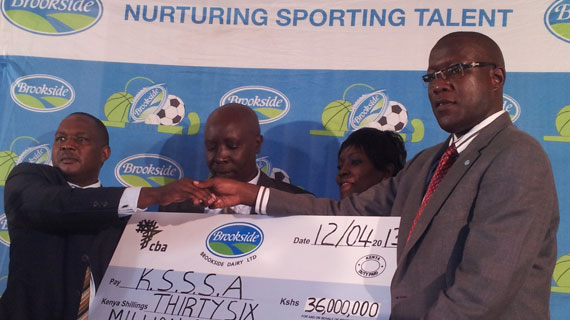 Peter Wasonga hands over the cheque

The Kenya Secondary Schools Sports Association (KSSSA) on  Friday morning landed a major boost when main sponsors Brookside Dairies announced a renewed partnership that will stretch for another four years.

The sponsorship that is worth 36 million shillings was unveiled by Brookside Marketing manager Peter Wasonga during a press briefing in Nairobi on Friday morning.

This year’s national term One school games will be held next week at the Mangu High School and Thika Municipal stadium.

While speaking during the briefing that was also attended by The Ministry of Education and KSSSA officials, Wasonga reiterated his company’s commitment towards supporting the nurturing of upcoming talents especially at school level which is famed for producing top standard talents across all sporting disciplines.

“Today we are pleased to announce that Brookside will remain committed towards supporting the development of talent at the grassroots. We believe that sports is just like any other career that needs to be given all the needed support to flourish.” He said.

Wasonga continued to add that his company will refurbish facilities at the host schools to help in uplifting the standards of the games.

James Kairu the deputy director of quality assurance at the ministry of education thanked Brookside for their continued support.