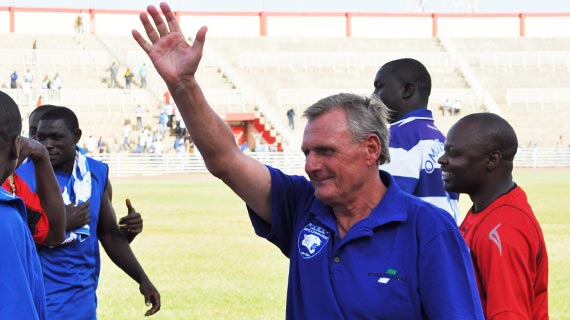 AFC leopards Coach Jan Koops was at the Coast on Saturday during the finals of the Kenya Secondary School games and his trip down south was not in vain. Koops spotted four young players who will have a chance to attend the team’s training on Tuesday for a chance to impress and earn a place in the team. One other player had been previously scouted from Kakamega High School and he is set to start training with the Leopards in November.

Coach Jan Koops while speaking to Michezoafrika.com says that Youth development is the way to go for Kenyan teams and the Kenyan game as a whole. The tactician has acknowledged that there is immense talent in the grassroots but has lamented that the development of the same is not being taken keenly.

“I only watched the finals and I saw a lot of talent. There are many good players down at the grassroots and if we could only get to tap and nurture the same, we would not be worrying of depletion of talent at the big stage.” The Coach says.

The four players who were scouted during the finals are Gordon Mukolwe and Meshack Karani from the National Champions St. Anthonys, Michael Olunga and Timothy Ludah from Upperhill and Alphonso Ndonye from Kakamega who had been previously scouted.

“We had spotted Alphonso earlier and had talked to his teachers about him coming over to Leopards. We agreed that he will transfer to Upper hill High school here in Nairobi in his last year so that we can monitor him closely. We will also discuss matters financial, like paying for his fees and upkeep while in Nairobi,” Koops says.

“The other four will be coming to the training session on Tuesday and we will assess them more with chances of fusing them to our under 20 team,” the tactician adds.