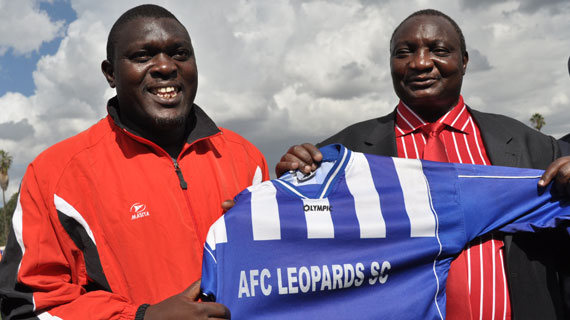 Nick Yakhama was on Thursday afternoon officially unveiled as the new coach at AFC Leopards following the recent dismissal of Robert Matano on Sunday.Yakhama was unveiled and later introduced to the players by chairman Alex Ole Magelo at the City Stadium in Nairobi during the team’s training session.

Yakhama makes a comeback to AFC Leopards for the second time in charge as head coach with a handsome record including saving the club from relegation in 2009.Before his new job at AFC, Yakhama guided Chemelil Sugar in the 2010 season saving them from relegation but was fired on Monday this week by the management of his immediate former club Chemelil Sugar on allegations of gross misconduct.

Other members of the new technical bench include Eliud Omukiya as assistant coach, Bernard Onyango as team manager, Patrick Ngusale as Physiotherapist and Haggai Azande as goalkeeper’s trainer. The changes take effect immediately and Yakhama will have his first training session with the team on Friday ahead of their match against Bandari FC to be played on 2nd May.

Speaking during the unveiling,AFC Leopards chairman Alex Ole Magelo praised the good performance record of Yakhama saying as a top former international player,Yakhama holds all the credentials to navigate the big pressure that comes with a big club like AFC Leopards.

“As mandated by the over 6 million fans of the popular club, The AFC Leopards’ executive management is glad to unveil Nick Yakhama as the new head coach of the club with immediate effect. His impressive record and credentials include saving the club from relegation in 2009 and repeating the same feat in 2010 with KPL club Chemelil Sugar. He also managed to win the KPL title unbeaten while at Mumias Sugar in 2004/2005 league.” Said Magelo.

Yakhama in an address to the press immediately after being unveiled as the new coach promised to work hard to ensure the team delivers the much needed results that will bring back the glory of the team.Yakhama however hinted at some changes in the playing unit come the mid season transfer window.

“This is a great team and we shall do everything to ensure the team delivers the positive results. I call for unity and togetherness for the betterment of the team. “Said the new coach Yakhama.

Present during the unveiling were AFC Leopards’ CEO Richard Ekhalie, Duncan Angode and Fredrick Lutta but noticeably absent were the other members of the AFC Leopards’ executive.