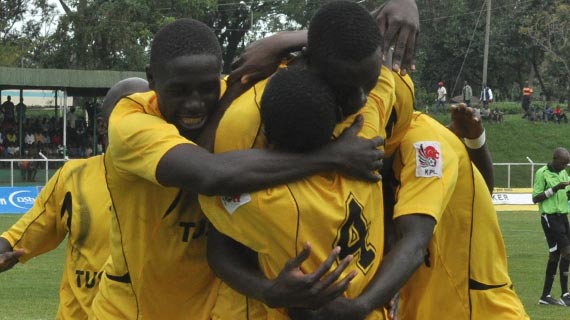 AFC’s unbeaten run in the Kenyan Premier League came to a halt on Saturday after they fell 2-0 to champion’s Tusker at Mbaraki Stadium in Mombasa. A deflected shot by Brian Mandela and a throw by substitute Luke Ochieng provided the goals that silenced the huge travelling AFC crowd.

The hosts had the first chance of the game when a foul by Tusker defender Joseph Shikokoti on Jimmy Bageya earned them a free kick in a promising position. Allan Wanga executed it well but the ferocious shot missed by an inch to hit the side of the net.

Tusker then got a chance after winning a free kick in the 8th minute but Shikokoti’s powerful shot went well off target.
AFC leopards then had two chances .Jimmy Bageya weaved past two tusker defenders then had a good shot that was saved by keeper Boniface Oluoch. A minute later, Allan Wanga set up Victor Ochieng who was ruled offside but still had his shot placed wide.

Tusker then createD the best chance of the game when Paul Were’s cross landed at Joseph Emeka’s legs but the Nigerian sent a feeble shot that was easily collected by keeper Matasi.

The next strike by Tusker had keeper Matasi off his line but Joseph Emeka and Ken Wendo misfired past the open net. As the game approached the half hour mark Man of the match Peter Opiyo was presented with an opportunity but he lost his footing when executing the shot.

The brewers had a good grip of the match and launched attack after attack. One such offensive in the 58th minute ended in a corner. Brian Mandela capitalized on a goal mouth melee to slot in the corner after Jonas Nahimana deflected the ball and gave keeper Matasi no chance to save.

AFC defender then fouled Paul Were to gift the visitors a free kick that Peter Opiyo curved well though it soared past Matasi. Tusker would have made it two had Ken Wendo been alert to capitalize on a failed header clearance by Eric Masika.

Ten minutes to the end Koops threw in his final dice with Oscar Kadenge coming in for Bernard Mang’oli. Pamzo responded by replacing the industrious Paul Were with Luke Ochieng.

Luke Ochieng’s first role was a throw that went past Matasi to double Tusker’s advantage in the 83rd minute.

The goal seemed to dampen AFC’s effort to search for an equalizer as Tusker had the best moves in the final minutes of the game.

Despite the loss, AFC Leopards still leads the table standings with 26points while Tusker has moved second with 22points.