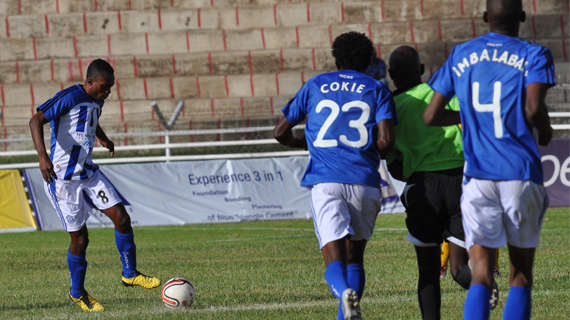 The Kenyan Premier entered its third week with AFC Leopards beating hosts and KPL defending champions Ulinzi FC by a solitary goal in an entertaining match played at Afraha stadium, Nakuru on Saturday. The second successive win for AFC meant the champions have had a bad start after only securing a point from their last three matches.

On the 20 minutes mark, Ulinzi had a great surge upfront that provided Stephen Waruru with a great opportunity to score but his first shot was saved by keeper Tiema while his second attempt went begging.

AFC Leopard’s head coach Robert Matano was forced to bring in Bernard Mang’oli after Salim Kinje was injured with 8 minutes to the break. Ulinzi were clearly superior in striking during the first half and had the best goal attempts but they lived to rue the missed chances. AFC’s only attempt was through Hugo Nzoka but the latter was ruled for offside in the last minute of the first half.

After the second half break, Evans Wandera came in for injured Augustine Etemesi.Ulinzi picked up again and with five minutes gone ,Waruru’s well executed back heel found unmarked Mike Baraza who did little to save the day for the misfiring soldiers when he sent it wide.

Ingwe then slowly crept into the game with their domination of the midfield well rewarded with a goal ten minutes after the break courtesy of a quick build up on the 55th minute. Ulinzi keeper Francis Ochieng miscalculated the movement of the ball and missed, Hugo Nzoka collected it from the wide far post and sent back a cross to unmarked Wandera who had an easy tap in to send the partisan traveling crowd into wild jubilation.

With a quarter of an hour to the end, Ulinzi’s Mike Baraza again missed a glorious opportunity to equalize after he sent his close range shot wide with Tiema well beaten for the first time.

The scorer Evans Wandera would have turned from a hero to a villain had AFC conceded a late goal after he earned a second yellow and was sent off to the dressing room thus giving the soldiers a one man advantage with 10 minutes to go.

AFC keeper Bernard Tiema pulled a man of the match performance after he saved several goal bound shots from Ulinzi who capitalized on the numbers advantage to search for the elusive equalizer.

Ulinzi’s Stephen Waruru had a great game with several of his crosses causing trouble to the AFC defense but his final touches in front of  goal let him down.

Captain Stephen Ocholla was also a major culprit after he wasted two clear chances by failing to direct his powerful headers into the goal posts.

The second win in a row catapults AFC Leopards into the top of the KPL table and leaves the most popular club hard die fans with great expectations for this season which has just began.

The clash was televised live on SuperSport 9 and KBC with the pathetic state of the pitch clearly apparent.