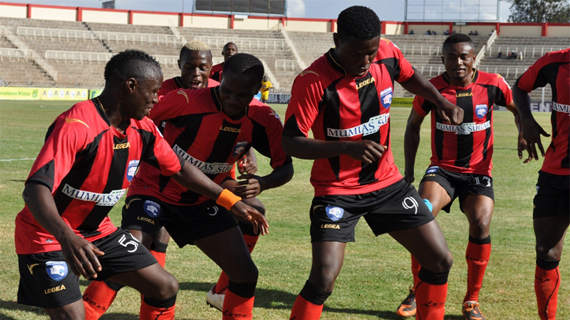 By MICHEZOAFRIKA STAFF 19 Feb 2012
AFC Leopards beat Mathare United 2-0 in an action packed and thrilling match at Nyayo Stadium on Sunday afternoon. This was AFC Leopard's first win this season and puts them on four points while Mathare United has now lost two of their opening matches.

The match provided  a chance for internationals Allan Wanga(AFC Leopard) and Jamal Mohammed (Mathare United) to prove their pedigree after returning back to the local league from professional stints abroad.

Jimmy Bageya justified his start putting Leopards in the lead in the 30th minute when he capitalized on a goalkeeping blunder from keeper Joseph Rutto to notch in the opener. Rutto mistimed a cross from the right losing the grip on it and Bageya banging the ball home.

The goal was always coming as Leopards had taken control of the early exchanges with Bernard Mang’oli outwitting Jamal Mohammed in the midfield power tussle.

Allan Wanga making his league debut for Ingwe was a constant threat in the Mathare backline causing all sorts of problems to Lloyd Wahome.

AFC Leopards led by a single goal as the teams went for the half time break with Mathare failing to keep the powered attack at tubs.

Two minutes after the breather, Leopards launched an attack spear headed by new signing Allan Wanga. The former Sofapaka man went on a wide run on the right before cutting in a cross that was tapped in by a well-positioned Bernard.
Jamal Mohammed, seeming not to be getting the rhythm in his new club was subbed and his place taken by former Tusker man Antony Khadudu.

Leopards top talisman Mike Barasa was also introduced 15 minutes from the end of the match subbing impressive man of the match Jimmy Bageya. Barasa had been sidelined to the bench for the first time in the league since making a switch from Ulinzi Stars in June last year.

Jesse Were came in for Andrew Tololwa, and the striker perhaps had the best chance to draw a goal back for his team, but he sent the ball screaming over the bar with only keeper Matasi to beat after some good work from Daniel Mwaura on the right.

Mathare have now succumbed to their second successive defeat after going down 1-3 to Sony last weekend.