Masika salvages a point for AFC at Karuturi 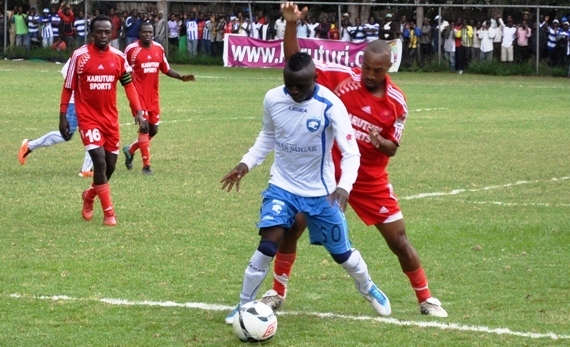 Masika salvages a point for AFC at Karuturi

Erick Masika scored in the 49th minute as AFC leopards came from a goal down to hold home team Karuturi Sports at their “Old Trafford” backyard in Naivasha.AFC Leopards had succumbed to a 13th minute goal from Benjamin Oketch.

The flower men had began the match on a high taking advantage of AFC Leopards’s long time to get into the match. In the 13th minute, John Mwangi was fouled from 40 yards out. Benjamin Oketch was handed the opportunity and  he sent a ferocious shot that evaded keeper Patrick Matasi for the first goal of the match.

Kennedy Oduor and John Mwangi were constant treats to the Leopards backline but the finishing was not quite on point.

Just as the first half was coming to an end, Leopards almost slipped into a second goal. Erick Masika slipped and missed a clearance from a long ball in. Allan Otindo picked up the ball and raced towards goal but the best he could do was shoot straight at keeper Patrick Matasi.

Come the second half coupled with some light showers,AFC Leopards came back marauding seeking for the equalizer to settle their nerves.  An attack masterminded by Salim Kinje from the right brought some nervous moments into the Karuturi back yard. Jimmy Bagaye was fouled in the process. Kinje took the resultant freekick. Masika who was lurking in the 6-yard box dived in but his header came off a Karuturi defender.i

Kinje and Bernard Mang’oli started short the resultant corner with Knje swinging in the cross. Masika once again popped his head in and notched in his first goal of season for the Leopards.

The game was stopped in the 59th minute after Karuturi Coach Michael Nam was given the matching orders for protesting a decision. Nam refused to walk out of the pitch but concerted efforts from the team officials and the players cooled him down and he agreed to leave.

The game continued but none of the teams could get a second goal. Both resorted to cautious play with the rains pounding and making the pitch slippery.

Despite the draw,AFC still leads in the KPL log with 27 points,5 better than second placed Tusker FC who have a game at hand.