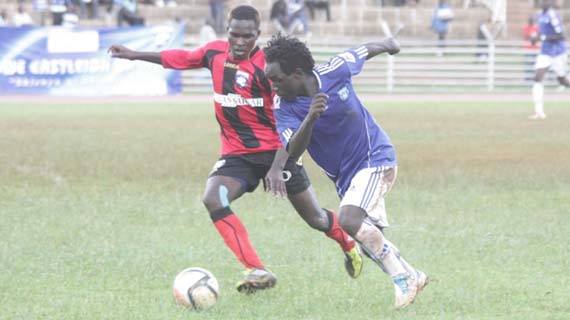 After a barren first half, bottom placed Kawangware boys came back with a no nonsense attitude  with Serunkuma striking twice and assisting the other in an outing Ingwe fans, players and bench will want to forget fast if not immediately.

The first warning signs for the Leopards came in the first half when their former boy Justus Basweti struck a beautiful volley that came off the bar. City Stars had started the match strongly and had made sure that they had sealed all the spaces defensively and were cautious in attack.

Victor Ochieng’ had a good chance for the Leopards in the 10th minute but he missed a sitter with no one marking him.

Allan Wanga returning from injury was well taken care of by the City Stars defense who made sure the former HAGL man did not have room to try his magic. Jan Koops was forced into an early sub after Erick Masika was injured. In came Charles Okwemba and this forced skipper Martin Imbalambala to be drawn back to defense.

Leopards could however not unlock the City Stars puzzle and the match went into rest with both teams at par.

Come the second half, it was an uphill task for the Leopards who looked lost in midfield and their attack did not click.

Ten minutes from the restart, Dani Serunkuma who was a constant thorn in the Leopards flesh proved just why he is one of the best rated attackers in the league this season when he notched in the first goal. Chesting down wonderfully a Victor Ashango freekick, the Ugandan import turned and shot into Matasi’s far right corner as the Leopards defense stood helpless.

Seven minutes later he turned from scorer to provider when he laid a lovely pass to Boniface Onyango who struck a wonderful shot that keeper Matasi could only wave at as it went in. A quick counter from their own half gifted substitute George Odary who passed on to the provider Danni.

Danni completed his brace and completed the skinning of the Leopard 20 minutes from time in cool fashion. A lofted ball from the City Stars own 18 yard area found Danni isolated alone in the other half. The Ugandan raced in his traditional with runs and fortune smiled his way as the only defender in his way, Jonas Nahimana,slipped. With keeper Matasi advancing towards the ball, Danni simply put the ball out of his path and into the net.

From then on Leopards looked like a lost group in the wild and most of their attacks never seemed to bear any fruits. Their midfield did not combine well and their attacks were thwarted repeatedly by a determined Stars.

The win lifts City Stars out of bottom place and reduces AFC Leopards’ lead at the top. Since their loss to Tusker, they have only managed a draw away to Karuturi.

Despite the loss, AFC is still perched at the summit of the KPL log with two points ahead of second placed Tusker who came from a goal down to beat Rangers 4-2 in an earlier match played at the same Nyayo stadium venue on Saturday afternoon.