Leopards shoot down Ulinzi to pile pressure on leaders 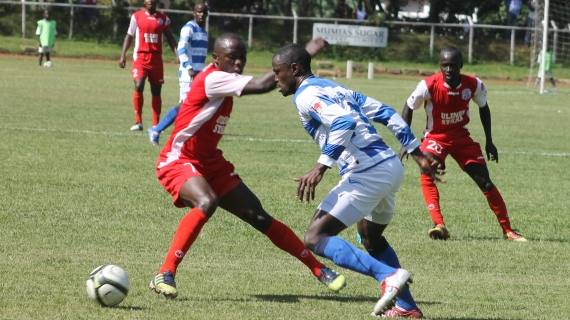 Leopards shoot down Ulinzi to pile pressure on leaders

AFC leopards continued their dominance over Ulinzi Stars with a 2-1 win against the soldiers at the Mumias Sports complex on Saturday afternoon. A 1st minute goal by Jonas Nahimana and a late strike from Victor Ochieng’ ensured Stephen Ochollah’s equalizer did nothing but add to the scoresheet.

Leopards had a perfect start scoring from a set piece in the first minute. Jonas Nahimana headed in from a Charles Okwemba freekick after Kelvin Ouma hacked down Paul Were on the extreme left.

The goal caught the soldiers flat footed as they were yet to settle in the match. However, they recovered gradually and they had plenty of chances in the first half.

Stephen Ochollah had a shot go wide after good build up from the back. Stephen Waruru had two chances back to back on the left but he failed to make both of them count. Evans Amwoka had the clearest of chances with half an hour gone after he beat the offside trap but he had a heavy first touch with only Patrick Matasi to beat.

Stephen Waruru had another perfect chance with five minutes to the breather when he slid into a Wycliffe Ochomo pass but the intended tap in went wide at the far post.

In the second half, the soldiers started with pressure as Leopards sought to close down the game. Allan Wanga came in for Mike Barasa while Idrissa Rajab paved way for Martin Imbalambala.

Allan Muhati came in for Ulinzi Stars in place of Wycliffe Ochomo and the striker had an immediate impact but his shot went wide from a quick counter.

Stephen Waruru had another clearest of chances in the 55th minute with keeper Patrick Matasi out of his line, but he chipped over the bar when he had better options to pass the ball.

On the hour mark, Victor Ochieng had a chance for Leopards only for his shot on the half turn to be saved by Jacktone Odhiambo. The keeper dropped the ball and picked it up again resulting in an indirect freekick that was wasted for a fruitless corner.

Allan Wanga had a chance alone in the box with a free header from an Edwin Baraza cross heading over the bar when it was easiest scoring than missing.

15 minutes to go, Stephen Ochollah restored parity with a powered shot from inside the box after a quick counter which saw Stephen Waruru cut back a 45 pass from the left flank. However, the soldiers' joy was short lived as just a minute later, Victor Ochieng’ restored Leopards’ lead from another set piece when he tapped in from a corner.

Jan Koops’ charges managed to sustain the pressure for the hard fought win, though Ulinzi would blame themselves for wasting chance after chance.