Leopards beat Thika to maintain grip at the top 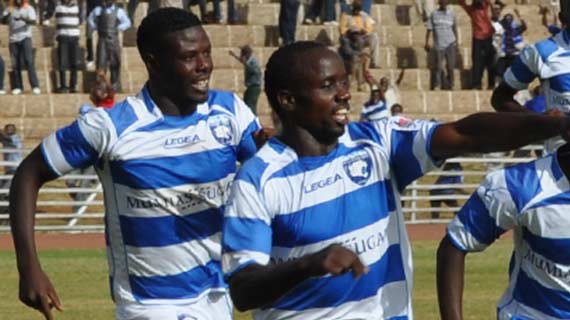 Leopards beat Thika to maintain grip at the top

AFC Leopards extended their unbeaten run in the league after a 2-1 win over Thika United at the Thika Municipal Stadium on Saturday afternoon. Victor Ochieng and Mike Barasa scored for Ingwe as they ensured that they stay on top spot in the league.

In a fast paced match that both teams showed attacking intent, Leopards were the first to hit the back of the net through Victor Ochieng’ who headed in Bernard Mangoli’s corner. The Short Ochieng’ surprisingly rose over the entre Thika defense to head in the opener.

Leopards’ lead lasted only eight minutes as Moses Arita drew the match to parity after capitalizing on some defensive misfortune from Leopards to dig in a foot and draw Thika level to silence the Thika Municipal Stadium tha had been invaded by the Leopards fans.

Five minutes later, Mike Barasa restored Leopards lead when he fired past Lucas Indeche. A quick counter attack gifted Jimmy Bagaye who ran into the Thika half and served an unmarked Barasa inside the Thika box. The prolific scorer put the ball into his favorite left foot before firing past a helpless Indeche.

Thika piled the pressure on Leopards in the second half with Clifton Miheso, Francis Kahata and Moses Arita spearheading the attack.

Five minutes after the restart, Francis Kahata shot was saved for a corner after an interchange of passes with Miheso. Moses Arita had a golden chance in the 58th minute after he beat the offside trap, but his attempted lob alone in the box went over the bar.

Francis Kahata once again saw his shot saved by the impressive Matasi in AFC’s goal.

The Leopards front line’s work was reduced as no balls came frequently through their way with Koops opting for a more defensive midfield.

The win now sees Leopards stretch their lead at the top to 26 points. They are yet to lose a match in the league this far and are 23 matches unbeaten.