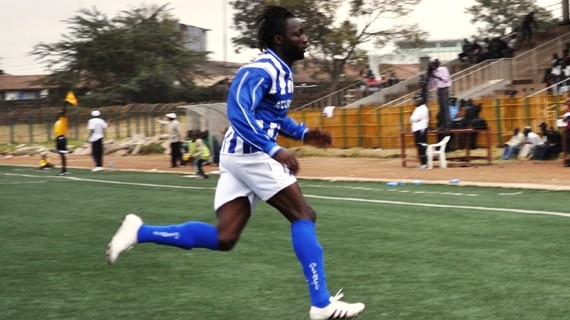 Am back! That is the message AFC Leopards’ Congolese striker Itubu Imbem sent to his fans when he fired home the winning goal against Karuturi sports in their fourth KPL match played at the Mumias Sports complex on Sunday afternoon.

Speaking to michezoafrika.com, Itubu thanked the fans in Mumias for turning out in large numbers and has promised more goals warning that AFC Leopards will stop at nothing but the title.

“The fans today were amazing. This was one of my best matches so far and it is good I came back with a goal and a win. I pray that God keeps me well and fit so I can continue with my good scoring form this season.” He said.

Imbem has been out of action since the beginning of the season owing to a jaw injury. In his first match, he collected a pass deep in the midfield from youthful Emmanuel Tostao, dribbled past two defenders and fired home from the edge of the eighteen yard box beyond a hapless Ayuko Noah in goal.

AFC Leopards cracked and almost gave away the lead at the stroke of half time in the 44th minute but they survived the scare with a goal line clearance following a David Owino’s header from a corner kick.

Referee Damaris Kimani from Nairobi raised eyebrows over some of her decisions with the conspicuous one being in the 65th minute when he red carded a Karuturi defender Edward Mbwabi for a dangerous foul on Tostao but later cancelled the same to a yellow card.

“This was a funny decision that puts her credentials to question. How can you red card a player for dangerous play then allow him back in play? Strange, I have never seen this in soccer.” Complained AFC Leopards’ team manager Bernad Onyango.

In another close attack by AFC Leopards, a Hugo Nzoka’s powerful header from a corner kick in the 72nd minute was saved by former Kenyan international Noah Ayuko right on the goal line with the fans already celebrating the second goal.

The win is the third consecutive victory for AFC Leopards under coach Matano and their next assignment against Western Stima in two weeks will be another cracker and acid test for the ever improving side.

“Our next assignment is a tough test for us in Bukhungu but we believe we have enough fans to push us to victory. Our injured players will be back to playing form and am not afraid, we shall prevail over the hot Stima boys.” Added team manager Bernard Onyango.

After the match AFC Leopards’ sponsors Mumias Sugar through their corporate affairs manager Pamela Lutta rewarded the players with 5 kilogrammes of sugar each as a gift from the company.