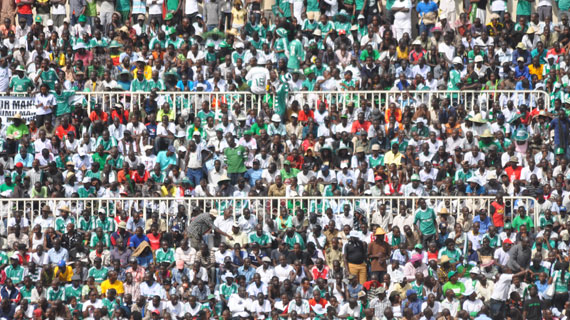 Gor Mahia capped their sweet 3-1 win over AFC Leopards with a handsome 5.59 Million shillings from gate collection. This is the best ever figure to be collected in the history of Kenyan soccer a sign that indeed the Kenyan Premier League is headed for the heavens.

5,595,900 was the gross figure of the amount collected from ticket sales, more than double of last year’s El Classico which collected approximately 2.5 million shillings.

According to the official figures released by ticket masters, a total of 2,997 VIP tickets were sold @500 shillings while 20,487 tickets for the terraces were sold @200 shillings.

That the two teams have the largest number of fans in the country is an obvious fact. There was an equal number of fans at the stadium which was divided and equally filled up in two equal halves.

The El Classico lived to its billing not only in terms of fans attendance but in organization and security.

Nothing was left to chance as hundreds of Police officers were on watch to ensure everything sailed smoothly.300 police officers remained on cue hours before, during and after the match and more so the fans from both ends behaved in a mature manner that invited commendation from all quarters.