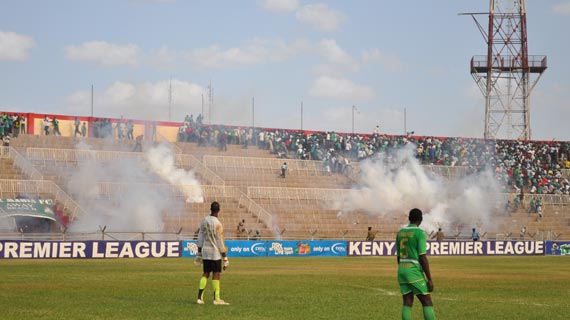 Following ugly scenes that dominated Sunday’s derby between Gor Mahia and arch rivals AFC Leopards , Football Kenya Federation has called for an emergency meeting to address the issue urgently with a joint statement expected from the soccer chiefs in Kenya.

The meeting is expected to take place in Nairobi starting 10:00AMand will be attended by KPL officials.

At the same time Gor Mahia’s executive office has announced that they will later on Monday hold a press briefing to bring to fore chore issues in relation to the same.

The club officials say they are disturbed by the turn of events and are holding an emergency meeting to discuss the events of the day.

However, Gor Mahia’s vice chairman Faiz Ochieng has pointed an accusing finger to the match referee Davies Omweno saying the red card was the cause of the whole drama and the referee’s body should be held accountable for the mess.

“This whole issue was started by the referee’s red card. As a club we will hold an emergency meeting and will later address the media but  we call on our fans to exercise patience at this time  because Sunday incidents are not good for the face of our Kenyan soccer.” He said.