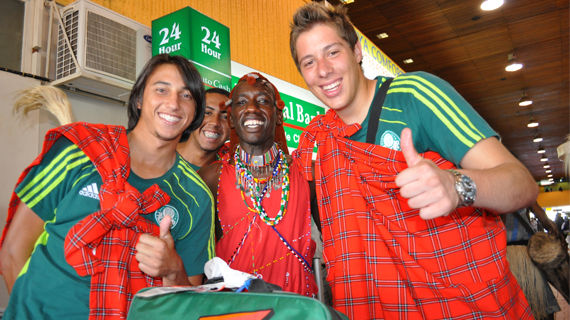 The highly expected Brazilian soccer team Palmeiras FC (U-23) jetted into the country on Thursday afternoon to a beautiful traditional welcome at the Jomo Kenyatta International Airport.

The 25 member delegation of 18 players and seven officials touched down at the JKIA shortly before 2:45 pm aboard South African airlines.

On hand to receive the team was a delegation from the Brazilian embassy in Kenya and Sadili Oval director Dr. Elizabeth Odera.Also parading along the Airport international arrivals lounge was a group of traditional Maasai dancers and Chuka drummers who gave the Samba boys a feel of the Kenyan Song, dance and culture. All the players and officials were also dressed up in traditional Maasai outfit by officials from the Kenya tourism board and Dr.Liz Odera of Sadili Oval.

The Brazilian team is in the country to conduct coaching clinics and play a friendly match against one of Kenya’s leading premier league sides Gor Mahia FC on Sunday at the Nyayo national stadium. The friendly match will mark the climax of the Brazil/Kenya expo that has been running since March 22nd in Nairobi.

Speaking upon arrival, leader of delegation Raul Pires Facini said they are delighted to touch down in Africa for the first time and are looking forward to share in the cultures and traditions of the Kenyans apart from playing soccer.

“We are very excited about this trip and we are looking forward to make new friends and learn new cultures. We look forward to going back home with new culture and wonderful pictures and memories of beautiful times shared with the lovely people of Kenya.” Said Raul.

The players drawn from the Palmeiras team have been in training for the last two weeks specifically for the Kenyan match though they have very little knowledge of Kenyan soccer.

“We expect a fast, strong and physical game against our Kenyan opponents though we do not know anything about their mode of play or soccer history. We have been preparing for the last two weeks specifically for this friendly match and we look forward to an interesting day.” Added Raul.

Amongst the 18 players, two have played for the Brazilian Under 20 national team and two for the under 18 youth national team with Francinei Marciano dos Santos tipped to being the most lethal player to watch in the midfield.

Team captain Muriro Gomes Ferreira speaking in Portuguese through a translator said they are well prepared for the match, they are happy to be here and Kenyans should expect an entertaining match from the Brazilian Samba Boys on Sunday.