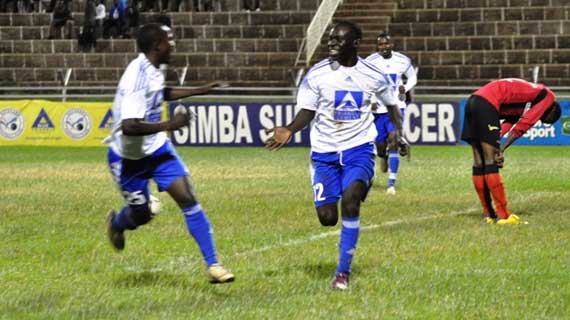 Kenyan Premier League top scorer John Baraza struck a goal in each half as Sofapaka beat AFC leopards 2-1 to put the 2009 champions firmly on the leaders’ board as the league comes to a break. Martin Imbalambala scored in the 70th minute but it was too little too late to salvage a point for Ingwe.

Sofapaka took the early chances commanding play in their usual possessive system. Baraza opened scores in the 13th minute with a beautiful diving header after latching on to a Mudde Musa cross. AFC keeper Patrick Matasi could only watch helplessly as the ball rolled into the net.

AFC leopards almost immediately made a reply but Augustine Etemesi blasted over the bar with only the goalmouth at his mercy. Amon Muchiri had brought in a cross from the right with Mike Barasa heading it first time, but keeper Duncan Ochieng’ saved with his legs with Etemesi landing on the rebound.

On the half hour mark, Mike Barasa tested Ochieng with a ferocious shot with the shot stopper coming out with a fine save. Juma Abdallah had lost the ball in his own half with Kadenge feeding Barasa.

In the 45th minute, AFC looked like they had scored but Mike Barasa had guided the ball into the net with his arm and after celebrating what he though was a goal, he was rewarded with a yellow card.

Come the second half, Leopards started brightly with Jonas Nahimana making the first attempt.Ten minutes from the restart, the Amavubi defender had a decent long range shot which fell on Mike Barasa’s path. Barasa headed it changing it directions but Duncan Ochieng produced the best out of himself with a great reflex save.Jimmy Bagaye came in for Victor Ochieng who was tightly marked in the whole match and Charles Okwemba came in for Kadenge.

Koops made the attacking subs in a bid to pressurize Sofapaka. It paid dividends and in the 70th minute, Martin Imbalambala struck a long range free kick after being tapped through by Bernard Mang’oli. Keeper Duncan Ochieng was caught off his line and the ball rolled in for AFC fans’ sigh of relief.

The Leopard added more pressure as they sought the equalizer pinning Sofapaka into their own half. However, the Batoto Ba Mungu’s defense line kept their discipline to keep the attacks at bay.

In the first minute of added time, Nahimana was almost grabbing a dramatic late goal but his shot hit the upright.

Sofapaka are now at the top with 32 points while AFC Leopards remain third.