AFC Leopards marches on with win over Oserian 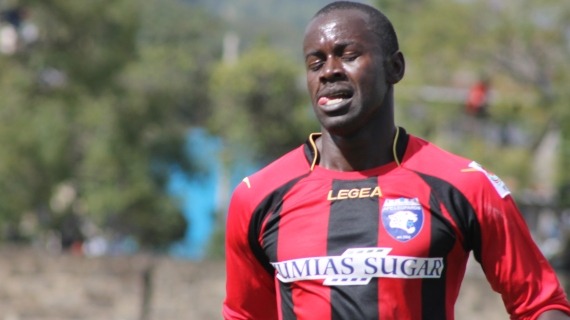 AFC Leopards marches on with win over Oserian

AFC Leopards claimed second spot in the Tusker Premier League after a 3-1 win over relegation threatened Oserian FC at Naivasha on Sunday afternoon to pile pressure on Tusker and Gor Mahia who meet on Sunday in a potential title decider.

AFC Leopards took less than 40 seconds to announce their intention. Jonas Nahimana's great header from a corner missed the target by inches.

Oserian replied immediately through Edmund Murai whose free kick was punched out by Matasi for a non-resultant corner. Matasi was called to task again to block Dennis Wafula’s cross a minute later.

The hosts took the lead through former Ingwe man Ben Barasa  whose shot evaded Nahimana and Matasi in the 9th minute.

Three minutes later it was another Barasa affair. A good build up involving Paul Were and Victor Ochieng found Mike Barasa who wasted no time beating keeper George Ochieng to level the score line.

In the 15th minute AFC Leopards won a free kick that Benard Mangoli successfully converted to give them the lead.

Paul Were’s good dribbling on his was to Oserian box needed intervention and captain Frankyln Osama responded to earn himself a yellow card and gift AFC a free kick that went to waste.

Six minutes to the break, Mike Barasa’s nice pass to Okwemba ended in a corner that was quickly cleared and allowed Oserian break on the counter but keeper Matasi blocked the effort.

Okwemba would have grabbed a brace in the last minute of the first period but a fingertip save by keeper Ochieng stood in his way.

At the second half kick-off Oserian coach Pamzo Omollo threw in John Keo in place of Aziz Mohammed. However, the going got tough for his side when captain Franklyn Osama was set for an early shower after collecting a second yellow. Joseph Okumu was pulled off for Fred Omondi whose role was to seal the void left by Osama.

The evergreen Paul Were was denied by the cross bar in the 57th minute with Oserian keeper well beaten.

In the last quarter of the game, Coach Jans Koops brought in Allan Wanga for Victor Ochieng to add spice to his striking force. Floribert Ndayisaba replaced Martin Imbalambala.

Charles Okwemba 84th minute freekick was saved on the line but he redeemed himself seconds later after capitalizing on keeper Ochieng’s blunder to make it 3-1.

Jonas Nahimana’s back pass almost resulted in a second goal for Oserian. Dennis Wafula rounded keeper Matasi but Nahimana recovered to block his shot aimed at the empty net.

AFC Leopards’ next match is against Mathare United before they end up their campaign away to Chemelil. They will be keenly watching the proceedings between Gor Mahia and Tusker on Sunday hoping for a draw.AFC Leopards has 54 points,same as Tusker who have a superior gaol difference while Gor Mahia has 52 points.

Oserian will visit Sony Sugar next before their last match against fellow strugglers Rangers FC.