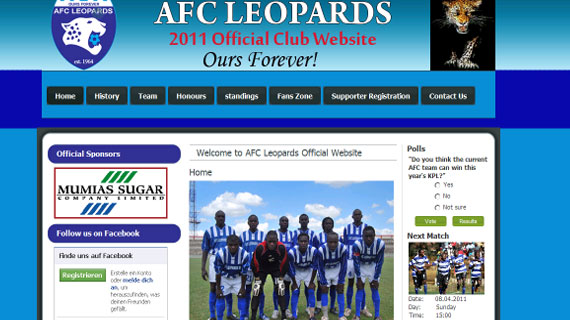 In a bid to streamline the dissemination of official communication, the new AFC Leopards management has launched a new website and Facebook group that will serve as the only official online communication channel for the team. Secretary General JJ Bukachi has announced.

The new site accessible using the URL http://www.allafcleopards.com is built using Joomla Content Management System and will be used to provide news and updates on match fixtures, results, latest video footage, player profiles besides providing a platform through which Ingwe fans can interact and poll for their favorite players.

The management has also seen it prudent to tap into social networking craze by creating a Facebook group named -AFC Leopards 2011 Official webpage and a twitter page that will provide up-to-date official news.

“We are still developing the website and we want to make it as interactive as possible before launching it soon.” Said Bukachi AFC Leopards secretary general.

The site developers are working on the final technical details to ensure the site is fully operational with an official launch ceremony also in the offing.AFC Leopards official sponsors Mumias Sugar has been extensively involved in the new endeavor that will ensure timely,relevant and accurate information dissemination.

As per the official’s statement, effort to utilize the old domain www.afcleopards.net proved futile due to unwillingness by the previous management team to surrender control of the website. An official statement from Secretary General JJ Bukachi read:

“Subject to previous office bearers who vacated office desire to swindle the clubs resources via advertisements and all other previous ways the club raised funds for support, and their unwillingness to surrender the control of the website 'afcleopards.net', the management team wishes to advise all that ALLAFCLEOPARDS.COM has been set up as the official communication avenue and only recognized website for our club.”

Another initiative by the Ingwe fans through a facebook group named AFC Leopards Fanatics has a website (http://www.ingwefans.com) that also provides timely information on the team. Another site http://afcleopards.co.ke also bears the Official website tag on its top banner.

Bukachi in an exclusive interview with Michezoafrika.com has also called on all fans to rally behind the team this coming Sunday in Mombasa calling on tem to have fan in a civilized manner that will leave the coastal fans admiring the sweetness that accompanies modern football and more so AFC Leopards.

“We have over 600 fans confirmed to be traveling to Mombasa this weekend and we call on others to follow us to the coast as we seek the vital three points against Congo. This is also a time for us to have fan and enjoy our Easter holiday in style.” Said Bukachi.