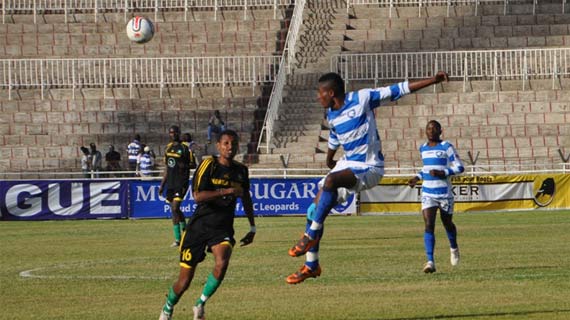 AFC Leopards and Chemelil FC settled for a barren in their opening 2012 Kenyan Premier League fixture played at Nyayo National Stadium on Saturday afternoon. The match came minutes after champions Tusker had booked themselves a 2-1 opening win against City Stars at the same venue.

The hosts-AFC Leopards- began the match on a high and strung passes that gave the crowd hope of an early goal that was never to be. A harmless back pass almost gave Ingwe the opening goal early in the match  after Chemelil keeper Fred Onyango misjudged the ball  but luckily he was far off the post and it rolled out for a corner.

Chemelil’s reply to the leopard’s strong start were masterminded by new signing Hadji Mwachoki but the solid combination between Nahimana Pako and Eric Masika proved hard to beat at the defense.

Midway through the first period, Salim Khamis and Jonas Nahimana misdirected their long range shots while Mike Baraza squandered the last opportunity in the first half.

Hadji Mwachoki had the first effort on goal immediately after the interval but keeper Patrick Matasi made a meal of his shot with an easy hold. Minutes later, a goal mouth melee at Chemelil ‘s end almost broke the deadlock but the ball did not cross the line as the sugar men held on to their good run against Ingwe.

Ugandan Abbassi Kiwalabye tried a grass cutting shot midway in the second period against his former masters but the Chemelil keeper read him well as he comfortably held the ball in his gloves.Jonas Nahimana and Masika tried to capitalize on another goal mouth melee but the ball was cleared by the Chemelil defense before further damage could be inflicted.

AFC Leopards Substitute Jimmy Bagaye who had come on for Oscar Kadenge beat keeper Fred Onyango but could not direct the ball into the net. Mike Baraza’s header after a neat free kick went wide as Ingwe intensified their attacks and Chemelil padded their defense.

Another substitute Laurent Tumba had the final effort in the added minutes but keeper Oyango again rose to the task to end the match on a stalemate and secure visitors Chemelil a vital away point.

After the match Chemelil Sugar coach Edward Manoah said he is satisfied to have opened the 2012 campaign with a single point away and against a good team.

“It was a good match and am satisfied with the performance of the boys. One point is not bad for a start considering we were playing away and against a very solid team.” He said.