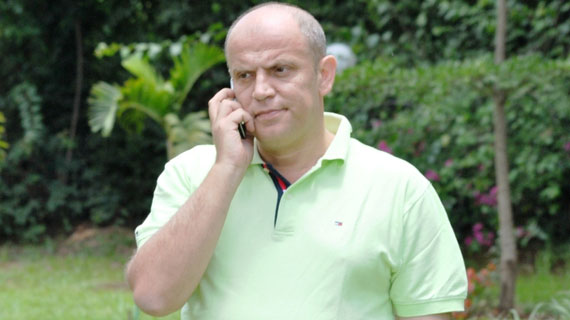 AFC Leopards technical director Hector Como was not at all consulted nor informed of the alleged sacking of the nine players from the team. Como is in return faulting the AFC Leopards management for making hurried decisions to sack the players without inviting him to the meetings held on Monday evening.

The said meeting that was meant to have decided to fire the players was held on Monday at the same time when Hector was meeting other prospective players to woo their services to the AFC Leopards pay list.

Not Consulted
“I have not been informed of anything about this move and am not aware of any players having been sacked. This is completely unprofessional because nobody involved or informed me of the decision if at all they have fired the players.” Said Hector Como.

On Monday, Hector was meeting: Jamal Mohamed, Mike Baraza, Joseph and Pascal Ochieng for talks on their possible moves to AFC Leopards in the second leg and he fails to understand why he was not consulted as the technical director.

“The executive meeting was held on Monday between 6pm to 11 pm and I was not in attendance and I do not know what they decided. I was from 6.30 till 7.30 with Mike Baraza for a cup of coffee and after mike I was talking with Jamal Mohamed. Around 9 pm I met Joseph Nyagah and was with him and Pascal Ochieng till 10:30 pm. So the decision made by any executive am not aware of and was not involved at all. So I distance myself from the media reports appearing of the alleged sackings.” He explained

“In my opinion and in reference to my philosophy,although I hold no powers to stop the management from making executive decisions, my duty is to advice and in this case it is a big mistake to let the players go at this time. Some of those players are of great quality and the positions they play are crucial.KPL’s new rule does not allow recruitment of more than four new players in the mid season transfer and if they are serious about releasing all these players, where shall we get the replacement to some of them.?” Asked a Concerned Hector.

In a chat with michezoafrika.com, Hector advises that the best move for AFC Leopards if indeed they are seeking to dump these players would be to loan them out to other clubs with a hope of retrieving their services at the end of the contractual period.

“For me it is better to loan out these players instead of sacking them. That way we will still own them in the event of other moves in future. Soccer is big business across the world and letting some of the best players go on free release is not advisable at all. Some of them can make frequent first eleven in other small clubs and that way we shall be improving their quality of the game since we shall be exposing them more. So in this case after 6 months these players playing constantly can be in great form when we get them back to us and automatically their value will be higher.” He added.

According to Como, the team needs surgery by recruiting one full back left defender, one stopper, one midfielder and a good lethal striker who can bring punch in attack upfront.

“It is not possible to recruit players in each position in mid season. That is not only unacceptable by the KPL rule but it is suicide to do so for a team that will have less time to gel in the mid season.Waudo is a great player we need to keep, Fullback right is only him and Edwin if we suppose that Edwin will have an injury who will substitute him? These are the technical questions we need to look at before making a final decision to fire players and I think the management is making a big mistake.” He quipped.

All said, the management holds all the executive powers to fire and hire players under advice from the technical bench. However none of the players has received neither an official letter of dismissal or release.

This is a developing story we will keep monitoring closely for your update.