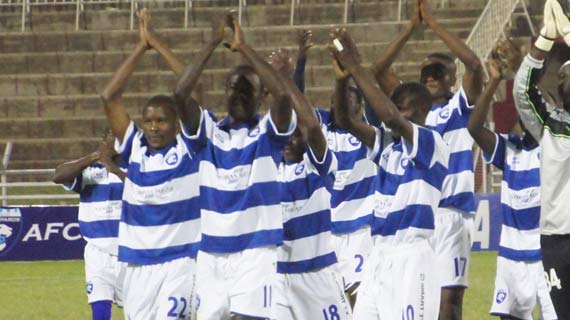 AFC Leopards keeper Patrick Matasi saved two penalties, Jonas Nahimana converted  from the spot while Allan Wanga’s scored from a lovely free kick to give AFC Leopards a 2-0 win over former champions Ulinzi FC in  an entertaining match at Afraha Stadium on Sunday.

Good combinations between Allan Wanga and Jimmy Bagaye yielded AFC leopards an early corner that was cleared on the line by the Ulinzi defense.

Midway through the first half Ulinzi’s Stephen Waururu forced AFC keeper  Patrick Matasi  to a fine save  after rifling a powerful shot that was punched out.

The hosts had a chance to save the lead after Stephen was hacked inside the box by Eric Masika in the 31st minute. Stephen Waruru rose to take the spot kick but keeper Patrick  Matasi saved it.

Next it was Wycliff Ochomo with a chance for Ulinzi but again Matasi saved the lovely chip from the former Gor Mahia striker.

The teams went for the break deadlocked at 0-0.

Four minutes after the break, Jimmy Bageya was brought down inside the box and center referee Nasur Doka had no choice but  to award a penalty. Jonas Nahimana calmly put the ball behind the net to make it 1-0 in favor of AFC Leopards.

A great combination between Bernard Mangoli and Allan Wanga forced Ulinzi keeper Jacktone Odhiambo off his line to clear the imminent danger.

In minute 58, Wycliffe Ochomo had a free header after a Ulinzi’s free kick but  the ball went wide.

At the half hour mark, Ulinzi won a second penalty after Jonas Nahimana handled the ball inside the box. This time it was Kevin Amwayi who took it but he could not also beat the man-of-the match keeper Matasi.

In-form Allan Wanga doubled AFC Leopards lead with a well taken free kick. This was his third goal in his last three matches to mark a great Kenyan return for the former Vietnam based striker.

In minute 84, Jonas Nahimana tried a left shoot from close range but Ulinzi keeper Jacktone Odhiambo blocked it for a non-resultant corner.

Mike Baraza would have made it 3-0 with a last minute shot after great exchanges with Allan Wanga but he missed the target.

The win pushed AFC Leopards to the top of the KPL Standings, two points clear of second placed Chemelil.

For the soldiers, the 2012 league is slowly turning into a nightmare. After four KPL  games the former champions have only 3 points.