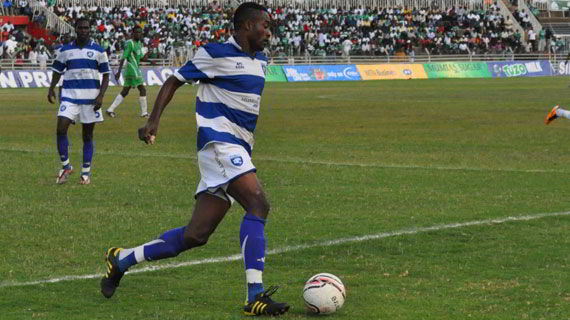 A second minute goal by Jonas Naimana was enough for impressive AFC Leopards to shoot down defending Champions and this seasons Kenyan Premier League contenders Ulinzi Stars. The win lifts Ingwe to an enviable 4th slot on the league standings with 45 points after 29 matches. Gor Mahia is 5th with 44 points but have a match against Rangers on Thursday.

The loss to Ulinzi is disastrous to their title campaign as their chances of getting even with Tusker at the helm of the league table went up in flames. The soldiers however still have an edge since they have played a match less than current leaders Tusker. The result makes the mathematics at the top more interesting and pushes  the title contention to the wire.

The floodlit match on Wednesday had to be stopped temporarily as power went off at Nyayo Stadium but the issue was resolved thus allowing the match to proceed on smoothly.

With only two minutes played Jonas Naimana headed in a Charles Okwemba corner to burrow in the lone goal of the match and scoop maximum points for a hard working Ingwe.

In the absence of lead striker Mike Baraza, Francis Chinjili and Jimmy Bageya had the duty of leading Ingwe’s firing machines.In the 34th minute the combination between the two almost resulted in a second but Bagaye misfired from close range as Ulinzi tumbled trying to find their footing.

Ulinzi tried a late comeback in the second half with better display than their hosts but it was AFC who almost got the second through Jimmy Bagaye and Bernard Mang’oli though both attempts were stopped by Jacktone Odhiambo in Ulinzi’s posts as Ingwe sneaked into the top territory with maximum points.

Coach Jans Wephukulu was a happy man after the match and chose to focus on celebrating the win rather than his team’s chances as they only have one fixture left to play this season against KCB. One thing is for sure for the Ingwe republicans-They will play in the next season’s Top 8 tournament thanks to the Dutchman's magic.