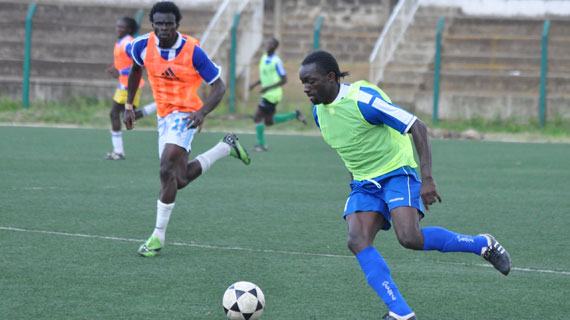 AFC Leopards has fired nine players from its bloated 32 man squad as they embark on an intensive exercise to strengthen their team at the start of the transfer market on June 1st.The heaviest causalities that have faced the razor at Leopards include the Congolese trio of Itubu Imbem, Hugo Nzoka and Demonde Selenga.

However, none of the fired players has received his dismissal letters but were informed through their mobile phones.They were accused of lack of commitment and complacency in the pitch.

“Yes I confirm that we have been fired by though we are yet to receive our dismissal letters. We are also yet to understand the reasons behind our sack since we have been very committed and dedicated in our performance.” Said Itubu Imbem.

Other players who were not spared the axe include: Douglas Okumu, David Kutwa, Laban Tshimonjero, Gideon Israel, Edgar Waudo and Shabaan Ramadhan.

AFC Leopards through its technical director Hector Komo has been in an aggressive player recruitment exercise in the last two months with high profile names in the Kenyan Premier league approached to join the Mumias Sugar sponsored club.

“We want to make AFC Leopards the best club in the region and we are committed to getting some of the best players to join our ranks.” Said Hector in an earlier interview with michezoafrika.com

The team is seeking to reduce its playing unit from 32 to 25 players for the second leg in a bid to keep its wages on a manageable scale as well as maintain competition amongst the players.

AFC Leopards has been struggling to get back its claws in the recent past with coach Nick Yakhama finding the going tough since his take over following the dismissal of Robert Matano a couple of weeks back.

Leopard currently occupies the 8th spot on the league table in the Kenyan Premier League standings with 16 points and lost their immediate last match at home 1-2 to Sony Sugar at Nyayo National Stadium on Saturday.