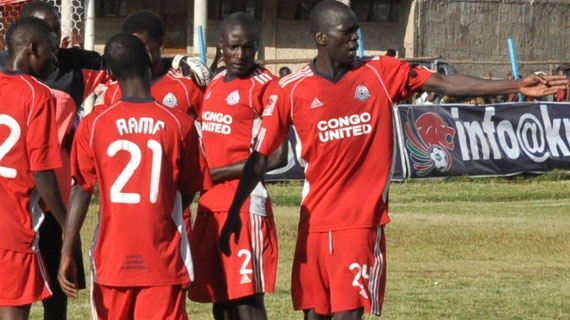 After a week long anxiety and confusion in the Congo United camp regarding their Kenya Premier League fixture against AFC Leopards, a 14 man squad departed Mombasa for Mumias town on Thursday evening, Michezoafrika.com has reliably learnt.

The team manager Arif Bhagazal said that they were forced to cut on numbers of traveling players as they had a fixed budget.  “The amount we had was to cater for 18 players in Nairobi. but now that Leopards has taken the game to Mumias, we can only cut on numbers as we cant source extra funds,” he added.

Bhagazal also blamed the mess on host team, AFC, for taking the game to western Kenya a distance of over 800 kilometers away from Mombasa knowing that “we have money problems.”

Congo United had threatened to boycott the match citing the long distance from Mombasa to the western town of Mumias. They had complained of financial difficulties and that it would be almost impossible to send the team to honor the match. However in a surprise turn around, a 14 man playing unit left Mombasa on Thursday evening for Mumias.

The coastal club, propping the KPL table from the bottom, has had financial problems with the team owners sending out a passionate appeal for funds. The club Vice chairman Evans Mzungu revealed how running a team is a costly affair. “We spend almost a million shillings on players’ salary per month and sometimes it becomes harsh for us to settle the bills in time,” he said.

The team will be hoping to put aside their financial woes as they face a hungry AFC Leopards side that haven’t won a match in their last three matches collecting three points out of possible nine. The Mumias Sugar-sponsored Leopards have been training at the company’s grounds in Mumias and will be praying that they translate the pitch familiarity into goals.

As the league draws to completion, Congo united are fast losing any hope of staying up especially after City Stars posting impressive results and their neighbors  Bandari returning a rare win. If they lose over the weekend, they can as well say goodbye to top flight football as they can’t dislodge Bandari from the 15th position.